Nirmala takes a swipe at Cong for ignoring national security 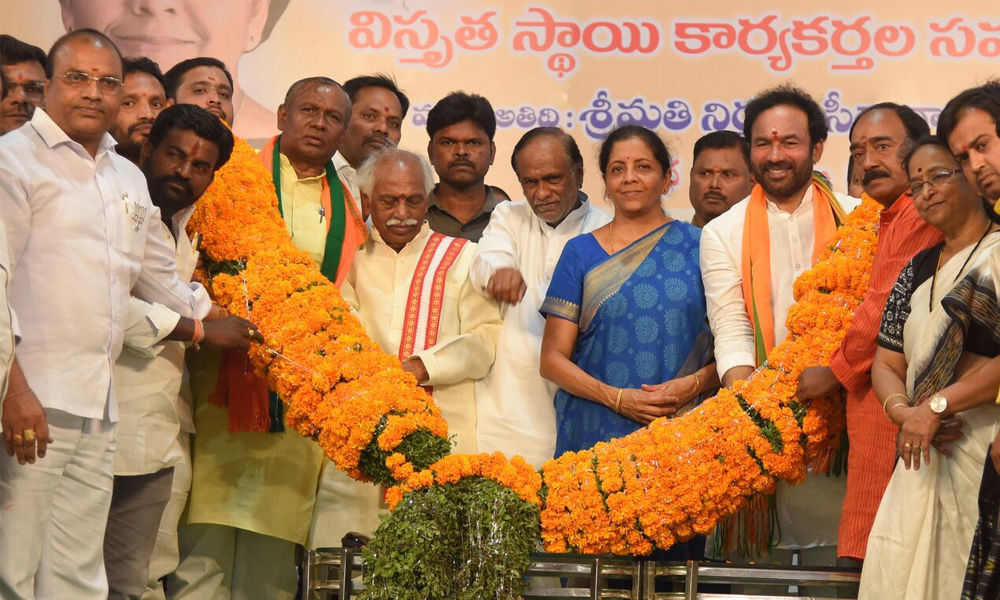 Hyderabad: Union Defence Minister Nirmala Sitharaman criticised the Congress party for not only neglecting national security but also its policies during the UPA government.

Addressing a meeting attended by ex-service men and intellectuals, organised in Malkajgiri Parliamentary Constituency, here on Sunday, she said, "it is necessary for the people to think over who fits best to lead the country and the reasons for the same ahead of the general elections."

Sharing her experience on her earlier stint as the Trade and Commerce Minister, Sitharaman said the Congress-led UPA government's lack of policy-making created an acute shortage of pulses by the time the BJP took charge in 2014.

She said the government not only took the challenge of controlling the skyrocketing prices of Tur Dal, Moong Dal etc, but also took appropriate measures. By the turn of three years during the current BJP regime, the total pulses production could not only meet the country's demand but also the stocks are in surplus, she pointed out.

Similarly, on the security front, the Congress-led UPA government had failed the country by not giving appropriate response to the 26/11 Mumbai attack.

This had emboldened the Pakistan to continue its support to the terror activities in the country. The Defence Minister reiterating her earlier charge against the Congress-led UPA and said that she has enough reasons to believe that the armed forces did tell the government of the day, that they were ready, but the government had to take a call on the matter.

However, no decision was taken to deter Pakistan from repeating its activities in the country.

Contrarily, the BJP-led government had given a free hand to the forces leading to the airstrikes to destroy a Jaish-e-Mohammed camp in Balakot, across the Line of Control.

But, certain sections within the country are speaking the line of Pakistan by demanding evidence for the airstrikes, she added.

Sitharaman said Narendra Modi's government not only took forward development and welfare agenda for the betterment of all sections of people but also is firm on securing the country. She said now the country has a leader who is bothered about people and the country more than anything of his own.

This makes Modi to stand out as a leader that the country needs at this juncture. She appealed to the people to vote for Bharatiya Janata Party (BJP) candidates to bring back Modi as the Prime Minister for the second time.

Bharatiya Janata Party (BJP) State president Dr K Laxman cautioned people that voting to TRS would be nothing more than voting to the Majlis.

Later, the Minister also addressed a party meeting held in Secunderabad Parliamentary constituency and another meeting of professionals from the IT and other sectors later in the evening.