A school building which is under dilapidation state collapsed at Sultan Bazar following heavy rainfall that has been lashing the city since Wednesday night. 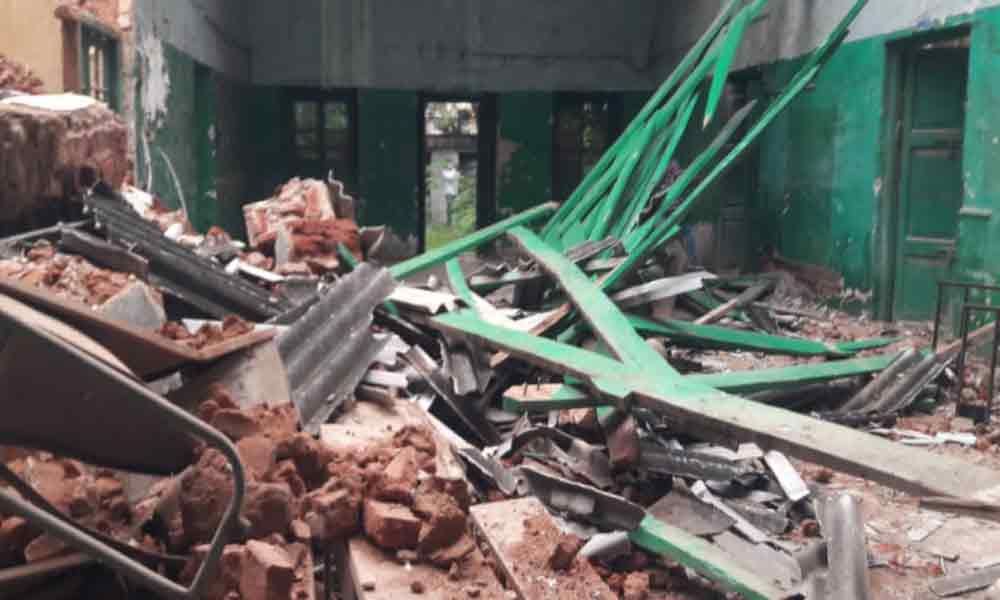 A 150-year-old school building which is under dilapidation state collapsed at Sultan Bazar following heavy rainfall that has been lashing the city since Wednesday night. No casualties have been reported since the school is close due to the corona pandemic.

The officials said that the old school building was vacant and no was injured in the mishap. However, some of the teachers came to the school on Thursday after the government gave instructions to the teachers to attend the school. The teacher's said that repairs in the school could not be taken up because of the restrictions of the Archaeology department. There is no renovation since the last 13 years, they added. The school which was set up in 1856 produced even one president of India Zakir Hussain. Hussain had done his primary education from the school. Earlier the school used to have Kannada, Telugu and Urdu media but until a couple of years, it was restricted only to Telugu.

According to the GHMC officials, heavy rains are likely to occur in the parts of the city today. Following the alert, the disaster response force and other emergency teams were directed to be on alert.

A few days ago, three of a family died after the roof of their house collapsed due to the heavy rains in Pagidyal village of Gandeed Mandal in Mahabubnagar district. The incident occurred when the mud house is completely drenched in the heavy rainfall that lashed the district overnight.

The deceased were identified as Vaishali (14), Bhavani (12) and their mother Sharanamma. Sharanamma's husband escaped from the mishap as he went out when the incident took place.