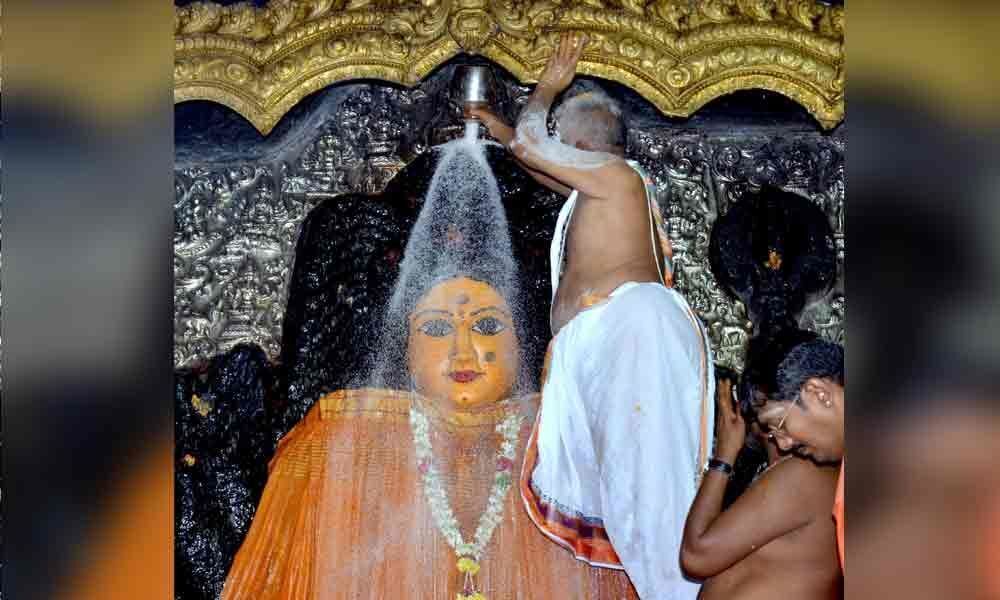 The historical Bhadrakali shrine was abuzz with devotees on Wednesday with the commencement of Shakambari Devi, a benign form of Goddess Durga and highly compassionate, utsavams.

Warangal: The historical Bhadrakali shrine was abuzz with devotees on Wednesday with the commencement of Shakambari Devi, a benign form of Goddess Durga and highly compassionate, utsavams. Bhadrakali shrine is one of those few temples in the country which conducts Shakambari utsavams in grandeur manner.

The fortnight festivity will be concluded on July 16 with the appearance of Shakambari Devi adorned with fruits, vegetables, green leaves and flowers thereby indicating that Goddess is the sustaining force of the world.

Speaking to The Hans India, chief priest Bhadrakali Seshu said: "The festival is being celebrated to propitiate the Shakambari Devi for good rains, bountiful harvest and copious yields of vegetables thus symbolising health and medicine." According to Seshu, Goddess, who was moved by the plight of people owing to prolonged famine on earth, tears rolled from her eyes.

The profuse shedding out of her countless eyes turned into a river descended on the earth, bringing a huge relief to the mankind. The festivities at the temple began with nityahnikam and utsavanigjna prayer at 4.30 am on Wednesday.

Later at 10 am, the priests performed Sahasra Kalashabhishekam. The ritual followed by neerajana mantra pushpam and kameshwari nityakramam. The rituals were performed in the supervision of noted pundit Puranam Maheshwaram Sharma.

Assistant commissioner and executive officer R Sunitha said that elaborate arrangements have been made for the comfort of devotees. Warangal West MLA D Vinay Bhaskar participated in the ritual.