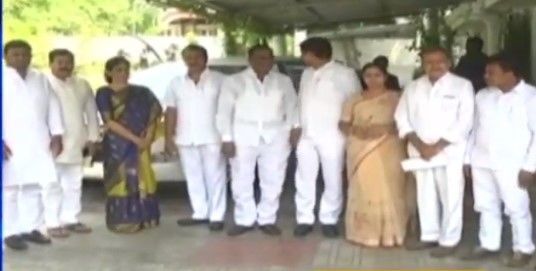 Earlier in the day, 12 Congress MLAs submitted a petition to the Speaker seeking their merger into TRS. The petition was signed by Kandala Upender Reddy, Jajala Surender, Haripriya Banoth, Devi Reddy Sudheer Reddy, Gandra Venkata Ramana Reddy, Chirumarthi Lingaiah, Kantha Rao Rega, Patlolla Sabitha Indra Reddy, Athram Sakku, Beeram Harshavardhan Reddy, Vanama Venkateswara Rao and Rohith Reddy. They informed the Speaker that they have resolved to merge into Telangana Rashtra Samithi Party with effect from 06.06.2019 and that they constitute two-thirds of total Members of Congress Legislature Party, out of 18 Members in Telangana Legislative Assembly and have agreed for such merger as required under Sub-para (2) of Paragraph 4 of the Tenth Schedule to the Constitution of India, as such, they may be treated as Members of Telangana Rashtra Samithi Legislature Party.

Later, Chief Minister K. Chandrashekhar Rao, who is also the Leader of the TRSLP, communicated to the Speaker asking him to accept the request of the Congress MLAs and finally, with the Speaker's consent, their defection was formalised into their merger with the TRS.