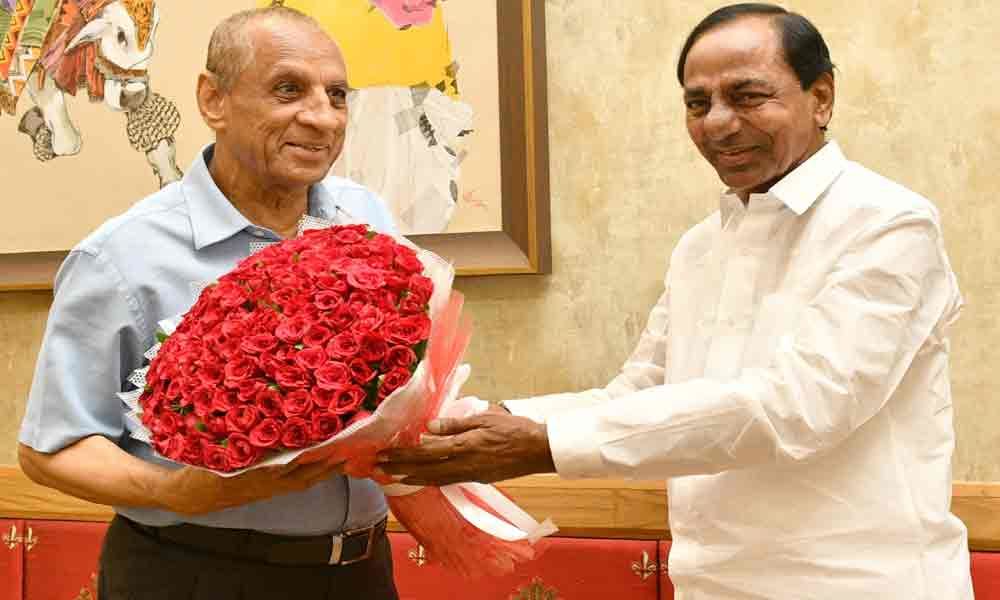 Hyderabad: Chief Minister K Chandrashekar Rao on Wednesday called on Governor ESL Narasi­m­han at Raj Bhavan. Though the meeting was to invite the Governor for the inauguration of Kale­shwaram project, spe­cu­lations were making rou­nds that the Chief Minister had indicated about the possibility of Cabinet exp­ansion in a week or 10 days.

However, officially it is learnt that KCR had explained to the Governor about his weeklong programmes starting with the inauguration of the Kaleshwaram lift irrigation project on June 21 and laying of foundation stones for the new Secretariat and Assembly buildings on June 27. The Chief Minister reportedly told the Governor that he would be laying the foundation stone for the Secretariat on June 27 since there were no auspicious days after that.

It may be mentioned here that the government will be waiting for the Cabinet committee to submit its report to decide whether to demolish all blocks in one go or do it phase by phase. Even the designs are yet to be finalised. KCR also informed the Governor that the Chief Ministers of Maharashtra and Andhra Pradesh would also be attending the inauguration of the project.

He also explained about the arrangements that are being made at the project site. The Chief Minister on Tuesday had shown a photograph of a model sent by Chennai-based architects and the building resembled a big palace. Earlier, the government had invited other designs as well. All these sources indicate that it would take another three months or so.

Meanwhile, it is being speculated that KCR wants to induct his son and TRS working president KT Rama Rao and former Irrigation Minister T Harish Rao into his Cabinet before the announcement of the schedule for the municipal elections slated for July first week.

Leaders said that KCR would have to wait till October for the expansion of his Cabinet if it does not happen by the end of this month as there are no auspicious days. Key portfolios like Finance, Irrigation, Municipal Administration and Urban Development (MA and UD) and Revenue do not have full time ministers affecting governance.