Stay in queue even in death in Warangal 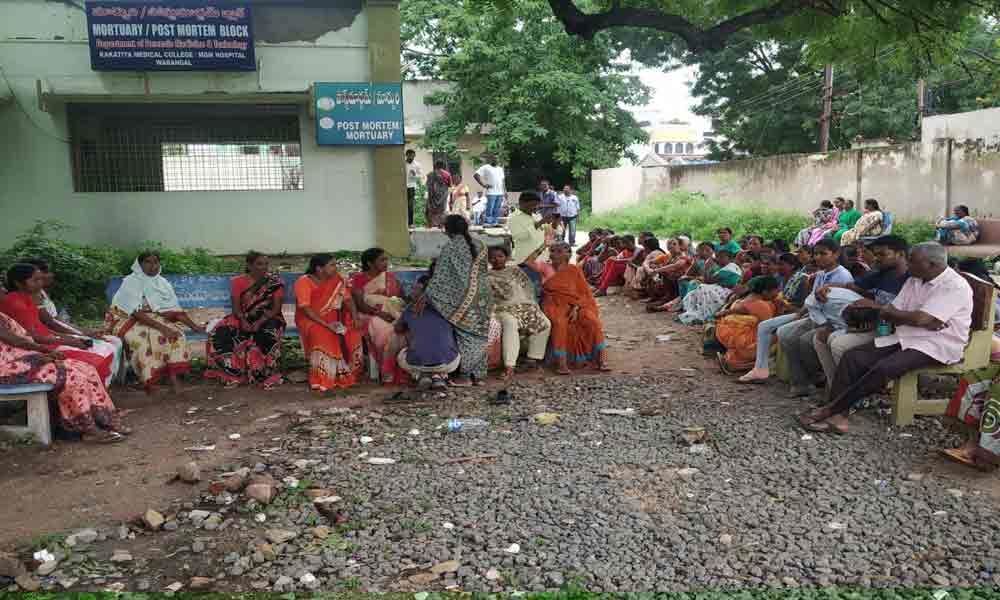 Life is exasperating in serpentine queues. Even in death there was no solace. Such was the drastic state of affairs prevailing in the mortuary run by the Department of Forensic Medicine and Toxicology, Kakatiya Medical College/MGM Hospital, which is facing acute shortage of staff.

Warangal: Life is exasperating in serpentine queues. Even in death there was no solace. Such was the drastic state of affairs prevailing in the mortuary run by the Department of Forensic Medicine and Toxicology, Kakatiya Medical College/MGM Hospital, which is facing acute shortage of staff.

The kin of the deceased forced to wait for hours to take possession of bodies of their near and dear one from the mortuary block. If the death of a person is inconsolable to the loved ones, waiting in the blocks of mortuary is even more agonising for them.

Due to the inordinate delay in performing postmortem, it has become very common for the kin of some deceased persons raising furore over the functioning of the Forensic Medicine and Toxicology.

A visit to the mortuary revealed that there was only single forensic expert who has to perform autopsies and look after storage and handing over of bodies to the kin. The kin of deceased persons venting out their ire is very common in this mortuary, however, the State Government is yet to address the shortage of staff working with the Forensic wing and morgue.

As of now, there are just two forensic experts to look after the autopsies, and two attenders to assist them. Speaking to The Hans India, Kakatiya Medical College (KMC) Principal S Sandhya said: "We understand the inconvenience caused to kin of the deceased.

We have made a request to the authorities to depute more experts to address the issue. As of now, we have two assistant professors to deal with the autopsies. These assistant professors also have the responsibility of taking classes for undergraduate students in the medical college. They will also have to attend court as the cases are medico-legal."

She said that it's a difficult job to handle as the staff often comes under severe criticism from people without actually knowing system. The autopsy is done only after the panchnama is conducted. The delay in panchnama is also attributed to staff working with the mortuary, she said. The number of autopsy cases the staff have to attend is anywhere between 6 and 10.

It is learnt that the two professor, two associate professor and four assistant professor posts have been vacant in the forensic and toxicology department. The mortuary also lacks support staff.

There are just two attenders of which one of them is an outsourced employee. It's also learnt that the mortuary has four of the five freezers functioning properly. It may be mentioned here that each freezer can store two bodies.