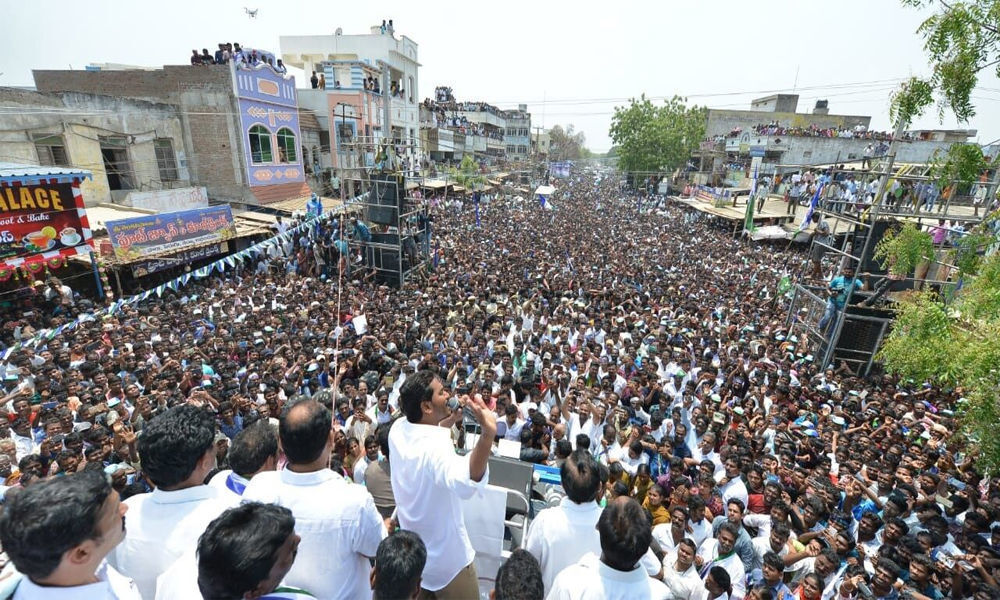 Jagan said that Chief Minister and his son Lokesh resorted to huge corruption and hence they were not able to explain about progress.

Kavali/ Tanguturu: Sharpening his attack on the TDP president N Chandrababu Naidu, YSRCP president YS Jaganmohan Reddy on Wednesday said that a vote for TDP would mean a vote for murder politics. Jagan said Chief Minister N Chandrababu Naidu had unleashed a reign of terror for past five years and has been eliminating political opponents. A vote for YSRCP, he said, would be a vote for welfare.

Addressing rallies as part of the electioneering, Jagan said, "Naidu has a track record of eliminating political opponents whether it be Vangaveeti Ranga or his own father-in-law NT Rama Rao and now my uncle Y S Vivekananda Reddy." YSRCP workers and leaders were brutally murdered during the past five years and there was cover up using his police, money, muscle and media.

Jagan said that Chief Minister and his son Lokesh resorted to huge corruption and hence they were not able to explain about progress. "Person who cannot work gets angry (Pani Cheyani Vadiki Kopamekkuva) and now the situation of Chandrababu is similar. He failed to do what he explained in 50-page long manifesto consisting 650 assurances. Now, his supporting yellow media is conducting debates only on the opposition aiming at diverting attention of the public so that they do not question the failures of TDP," said Jagan.

He said people are running away from TDP even though the chief minister is inviting them to give tickets. He said that people know that TDP had done nothing. The ruling party had removed its manifesto of 2014 elections from its official website which indicates their failure.

The ruling party failed to waive agriculture loans, failed to provide quality power, and employment to each family as assured in the manifesto. He asked the public to demand for Rs 1.2 lakh for each family as the government owed them for failing to provide employment or dole, they swallowed lands, assets, natural resources, and even failed to keep their promises.

If the elections hadn't been announced the CM would not have given you Rs 2,000 pension, he said. TDP is coming with huge money for buying votes. Don't fall prey to their tricks, he advised. Meanwhile, in an interesting development, YSRCP senior leader and former MP Y V Subba Reddy kept away from the public meeting.

It is said that he was unhappy with the party leadership since he was not considered for the Ongole Lok Sabha seat. YSRCP had chosen Magunta Srinivasulu Reddy who quit TDP couple of days back and joined YSRCP for this seat.