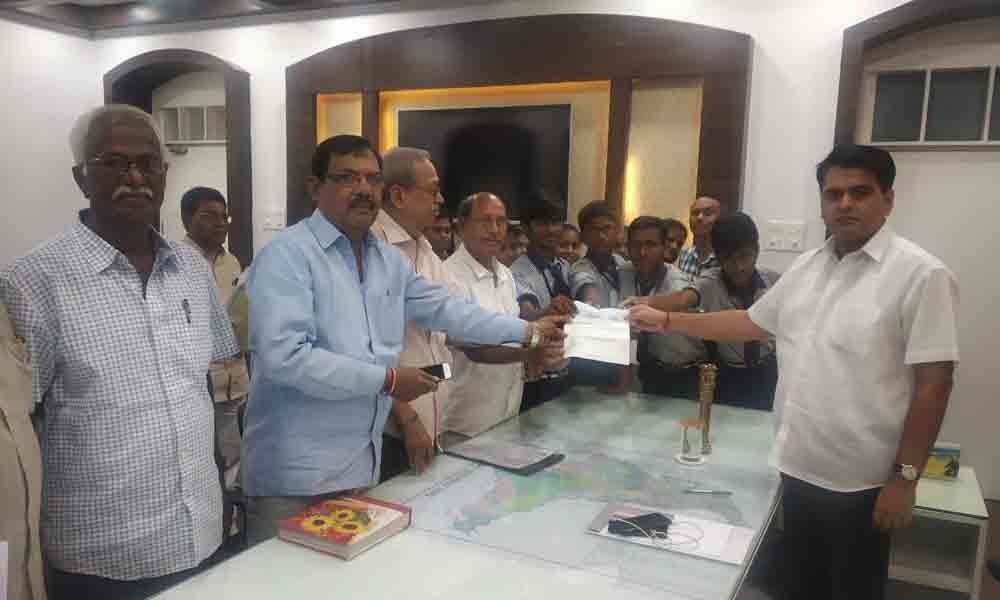 x
Office-bearers of Sri Ramakrishna Seva Samiti handing over a cheque for Rs 1,65,465 to East Godavari Collector Kartikeya Mishra for families of martyrs of Pulwama, at Collectorate in Kakinada on Monday.
Highlights

According to GMC sources, the corporation has identified 3,000 vacant lands in the city. The revenue officials will give notices to vacant land owners requesting them to clean their lands before April 30. If they did not respond, the GMC will fill pits in the lands and clean the lands with the help of JCBs and collect those expenses from land owners with penalty. Following the instructions of GMC Commissioner Srikesh B Lathkar, the revenue officials collecting details of vacant land owners and began an exercise to issue notices to them. The GMC felt that if the vacant lands are cleaned, there will be less chances to spread viral fevers in the city. The GMC is creating awareness on need to keep up surrounding areas clean to prevent spread of viral fevers and it is also conducting rallies with students and observing every Saturday as dry day.

In addition to this, the GMC will take up desilt works and clean the drains for smooth flow of drain water. The GMC has directed the Public Health Department to speed up restoration of roads, where UGD pipelines were laid. The sanitation workers will lift the garbage in dust bins regularly and keep them clean. The GMC decided to impose penalty on those who dump the garbage on roads, and it will implement cent per cent door-to-door garbage collection to avoid dumping of garbage on the roads.

Srikesh B Lathkar directed the sanitary inspectors to identify leakages to drinking water pipelines to avoid contamination of drinking water.