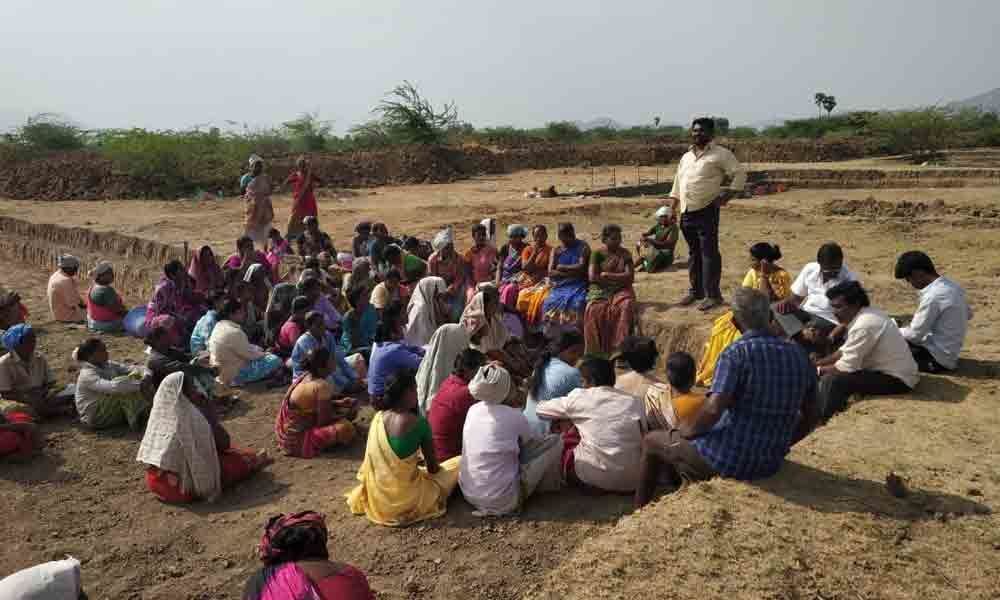 The AP Rythu Sangham carrying out a survey to know whether summer relief is provided to labourers engaged under the Mahatma Gandhi National Rural Employment Guarantee Scheme (MGNREGS) in various mandals across Chittoor district.

Tirupati: The AP Rythu Sangham carrying out a survey to know whether summer relief is provided to labourers engaged under the Mahatma Gandhi National Rural Employment Guarantee Scheme (MGNREGS) in various mandals across Chittoor district.

Labourers have brought to the notice of the Rythu Sangham leaders that the field assistants of the Rural Development department have failed to follow the guidelines issued by the Central government.

For safeguarding the NREGS workers from severe heat, the Centre instructed the State governments to provide enough drinking water, buttermilk and ORS packets at working site.

Also, to make medical kit available every day for emergency on working location.

The workers alleged that field assistants did not supply drinking water and buttermilk to them. Similar allegations were made by workers at Brahmana Pattu, Kupuchandrapeta, Ramapuram, RC Puram, Kuntrapakam and other villages in Tirupati Rural and RC Puram mandals when Rythu Sangham leaders had conducted survey.

In the absence of agricultural works, workers from several villages are doing NREGS works for Rs 200 per day. In the district, 6.37 lakh are NREGS job card holders in which 4.57 lakh are actively involved in various works.

Especially, labourers carrying out works in open fields in searing heat. They have no chance to relax under shade for some time as trees have dried up with scanty rainfall and temporary tents were not set up by officials.

Celsius for the last one week.