Illegal quarrying and transportation of sand is rampant in Kadapa district 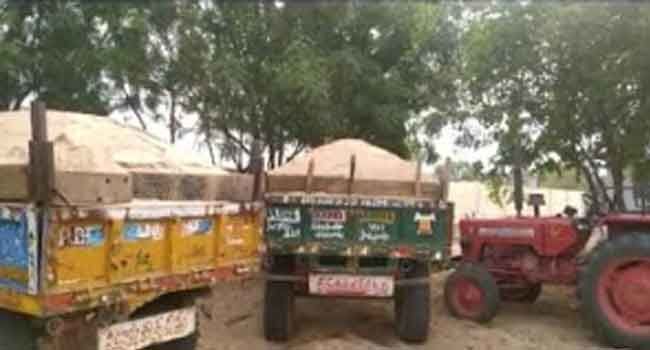 Illegal quarrying of sand and smuggling from Penna river various parts is rampant in Kadapa district.

Kadapa: Illegal quarrying of sand and smuggling from Penna river various parts is rampant in Kadapa district. Despite the administration is implementing serious stemps for preventing such illegal business but continued due to various reasons as sand mafia adopting several vulnerable methods even prepare to manhandle the public, and attacking officials when they tried to restrict the sand smuggling.

Manhandling on Somarajupalli VRO K.Sudhakara Reddy, Reddy last year June, attack on police at Sesha Reddy Palli village in Jammalamadugu mandal by sand mafia on 27th April this year, seizure about 500 tractors which are illegally transporting sand at several places by police and mining department for the couple of years witnessing the intensity of illegal quarrying in the district.

"Though illegal transportation of sand is an open secret to all we forced to maintain a spectatore role for various reasons. In case we dare to conduct raids on sand mafia we should have taste bitter experience from them " said an official to Hans India on the condition of anonymity.

We are spending sleepless nights due to illegal quarrying of sand around the clock in Pennar river as the tractors carrying material through the streets of our village which caused vast sound and environmental pollution. There is a number of instances our guys have faced dire consequences by manhandling by the sand mafia" M.Venkataramana Reddy Yerraguntla Mandal.

Following the directions of the government for securing Rs 5.11 crores revenue per annum through quarrying of sand District Level Sand Committee (DLSC) formed with mining, revenue, Pollution Control Board, Police under the Chairmen ship of Collector specified some guidelines for the transportation of sand from the reaches officially.

As per the norms sand has to be quarried only in 10 reaches against about 25 existing in the district. There also a standing instruction that the vehicles which are proposed to transport the sand should compulsory GPS instrument to know the details related to transportation of sand like it being carried for local consumption or outside areas from the district.

"It is permitted to dig the sand up to 80,000 cubic meters depth in the specified quarries to fetch revenue to the government. As per the norms, people who required sand should pay a prescribed sum in the Mee Seva centres and obtaining a receipt. We won't let any vehicle carrying sand without permission at any cost.