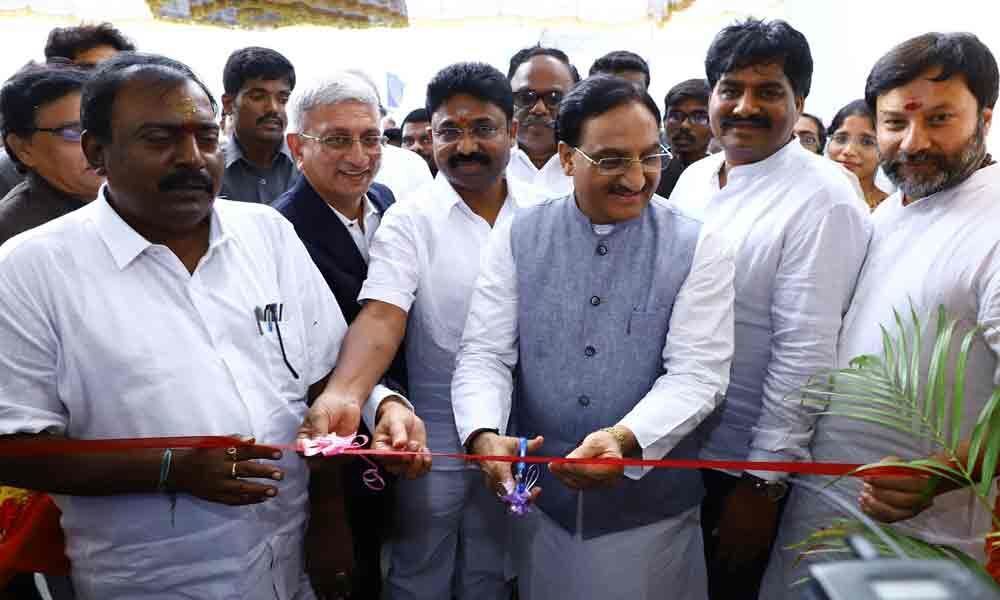 Booming technologies like automation, artificial intelligence, machine learning among other things will be meaningful only when they are used to...

Tirupati: Booming technologies like automation, artificial intelligence, machine learning among other things will be meaningful only when they are used to improve the social and economic conditions of ordinary citizens, opined the Union Minister for Human Resource Development Ramesh Pokhriyal Nishank.

Delivering the convocation address at the first convocation of IIT Tirupati at its transit campus in Yerpedu near Tirupati on Tuesday, he hoped that IIT Tirupati will take up this immense social responsibility and serve the larger interests of the country.

The Union Minister stressed that India should become scientifically advanced and here the role of institutions like IIT becomes crucial towards making the country a global innovation leader in science and technology. He lauded IITians terming them as forerunners of many of the start-ups in the country and abroad which will grow into the big corporate houses and add immensely to the economy.

Referring to the central institutes set up by NDA government since 2015 in the residual State of AP like IIT, IISER, Central University in Anantapur, Indian Institute of Petroleum and Energy in Visakhapatnam NIT in Tadepalligudem among others, he expressed hope that these institutes not only skill the youth but also bring the prosperity to the region.

Saying that the DPR of IIT Tirupati to build a campus for 2,500 students was approved in principle, he expected that this Institute will act as a pace setter and provide academic, research and innovation leadership through active networking with other institutions.

The Chairman of Board of Governors R Subrahmanyam said that in spite of the infrastructure constraints of a new institute, IIT Tirupati faculty members have vigorously been involved in academic and sponsored research. During the last three years, faculty and students have published more than 100 papers in reputed national and international journals.

The AP Minister for Education Dr A Suresh has assured wholehearted support from the State government for the speedy growth of the institution, for provision of various infrastructural support and clearances for the constructions being taken up.

The Director of IIT-T Prof KN Satyanarayana in his report said that since its inception, they were engaged in recruiting world class faculty members to teach and carry out cutting edge research often in collaboration with industry and academic institutions of international repute.

The Institute has a student strength of 823 at present which includes 582 B Tech, 118 MTech, 10 MSc and 32 MS and 81 PhD research students. In the convocation, 103 students have received their BTech degrees while one candidate has got his MS degree.

Nikhil Sharma was awarded Governor's prize. Earlier, Minister Ramesh Pokhriyal has inaugurated the stage 1A campus of IIT Tirupati. On this occasion, he said that the campus will be completed within two years and hoped that the students who complete their degrees from this campus will excel in their pursuits and become efficient graduates.