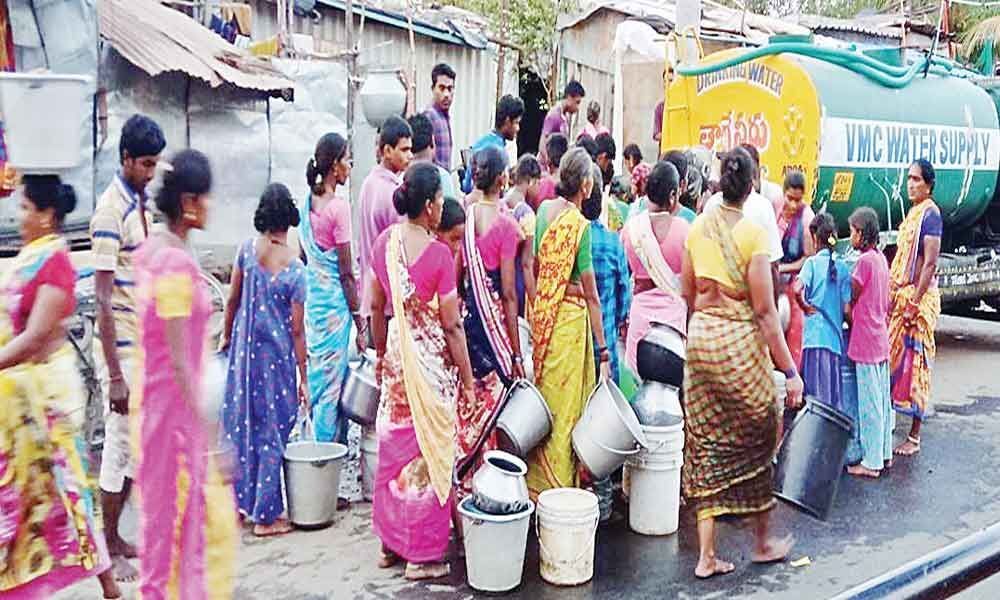 The Vizianagaram town, which is likely to be upgraded as municipal corporation is still lagging in providing basic amenities to people like drinking water facility on the outskirts.

Vizianagaram: The Vizianagaram town, which is likely to be upgraded as municipal corporation is still lagging in providing basic amenities to people like drinking water facility on the outskirts. The public is forced to purchase water cans as the administration failed to supply enough drinking water to them.

People are running behind water tankers to collect water into their vessels at many places. The town has three lakh population and it needs around 36 million litres of water per day. But the concerned department is supplying only 13 million litres per day.

Currently the municipality is supplying water for only one or two hours twice in a week. The water supply division has three huge water tanks at Kothapeta. Water from Champavathi river at Nellimarla and Ramateertham will be pumped into these huge tanks but these became very old and unhygienic.

Even more quantity of water is being wasted through leakages. As the public tap water is not safe, people are preferring to buy mineral water cans in by paying Rs 30 per 20 litres. The poor and working class people are waiting for water tankers to collect water in their streets.

As municipality recently merged YSR Nagar, Gajularega and KL Puram, the people in these areas are facing severe drinking water crisis. The women in slums are waiting for hours together for drinking water tankers as they don't know at what time they will come. Even after the arrival of tankers they need to fight with each other's to get chance to collect water.

K Bhavani of Thotapalem said "Right now we are getting water on alternate days and we need to collect water from tap here. Sometimes I need to fight with my friends to get my chance. If I'm not here at the time of getting water, I have to wait for two more days."

Municipal Chairman P Rama Krishna told The Hans India "Yes the situation is bad as Thatipudi reservoir is totally dried up and water from Gadi Gedda is yet to come. We have increased drinking water tankers and providing water to every colony. The works on water schemes are in progress and the problem will be solved soon."