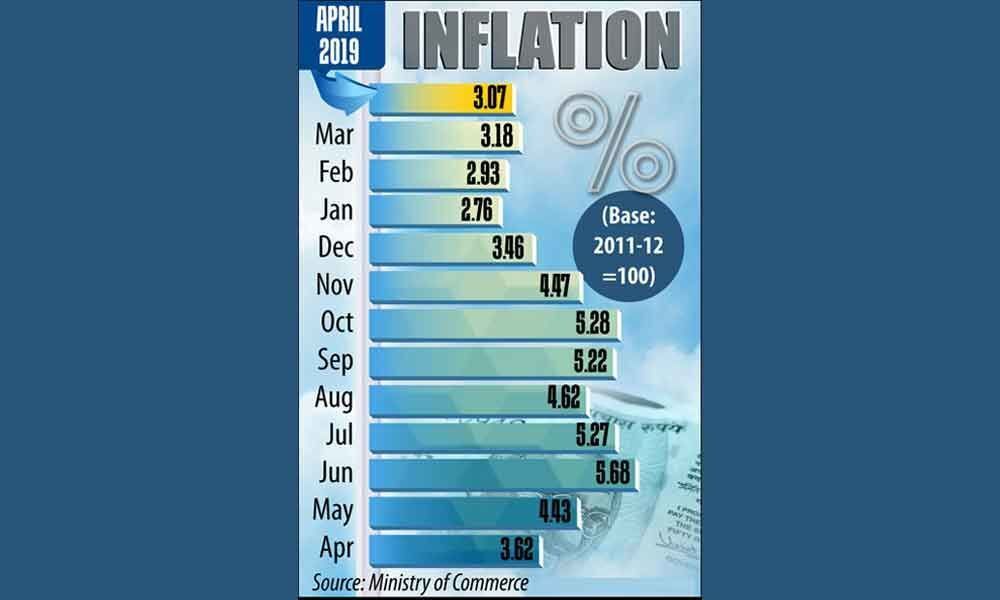 Inflation in the 'food articles' basket hardened to 7.37 per cent during April 2019 as against 5.68 per cent in March, as prices of vegetables skyrocketed

New Delhi: Wholesale inflation eased to 3.07 per cent in April on cheaper fuel and manufactured items, even as prices of food articles remained high, official data released on Tuesday showed.

The Wholesale Price Index-based inflation was at 3.18 per cent in March and 2.93 per cent in February.

Food inflation has been on the rise for the last five months since December 2018 when it was (-) 0.42 per cent.

However, inflation in the 'fuel and power' category cooled to 3.84 per cent, from 5.41 per cent in March.

Inflation in diesel halved to 3.24 per cent during the month from 7.33 per cent in March. For petrol, inflation was 1.74 per cent in April, as against 1.78 per cent in the previous month.

However, inflation in LPG spiked to 11.48 per cent in April, from 0.94 per cent in the month before.

Non-subsidised LPG is the gas that consumer buys after exhausting their quota of 12 cylinders of 14.2-kg at sub-market or subsidised rates. Price of subsidised LPG was almost unchanged at Rs 495.86 on April 1.

Manufactured items too saw easing of prices with inflation at 1.72 per cent in April, against 2.16 per cent in the previous month.

The Reserve Bank, which mainly factors in retail inflation for its monetary policy, had last month cut interest rate by 0.25 percentage points.