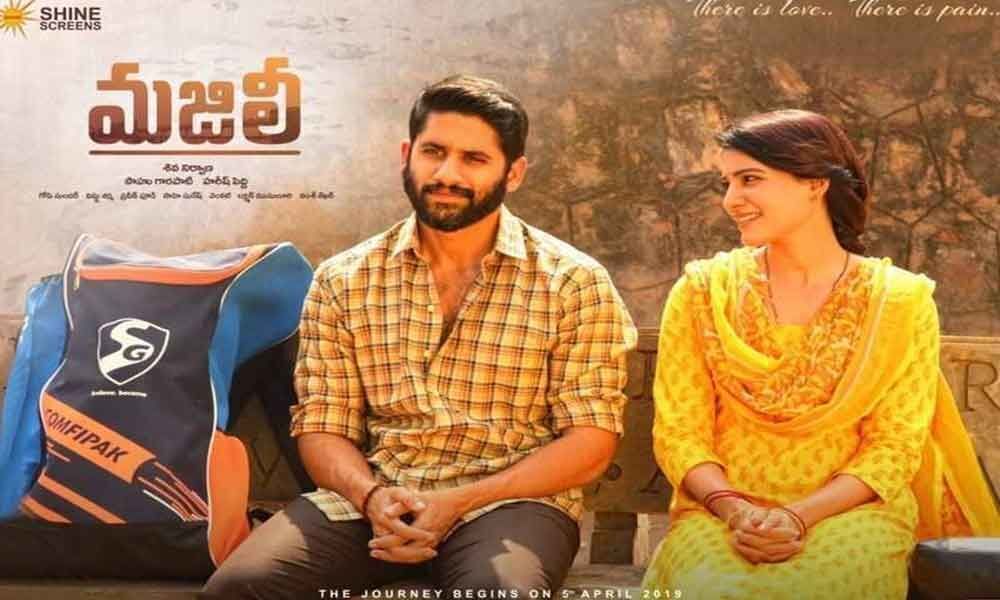 Naga Chaitanya has been looking for a solid entertainer from few releases.

Naga Chaitanya has been looking for a solid entertainer from few releases. He is unable to balance the content of his films with his ambition as an actor. His fans have also started getting fed up by his choices and he emotionally promised that with Majili is going to change that.

Samantha Akkineni his wife is acting with him in the movie for the first time after marriage and they acted as a couple in three movies before, Ye Maaya Chesave, Autonagar Surya, Manam.

Out of the three, two became classics and big hits making the couple, a crowd favourite. They were off-screen couple also helped them to garner more attention from their fans and TFI audiences.

As their movie, Majili released to a positive buzz on 5th April 2019, let's look at the Twitter audiences verdict on the movie.

Brilliant performances by @chay_akkineni @Samanthaprabhu2 in #Majili so proud of them!! Rao ramesh and posani👏👏 all the best team majili!!!

#Majili is a beautiful film delicately handled by @ShivaNirvana ! 👌
There is Love, there is pain and I felt both!
I didn't see the ChaySam I know, I only saw the characters they portrayed. @chay_akkineni @Samanthaprabhu2 were that convincing! 🙌 🤗 @divyanshak10 lovely debut 👍 pic.twitter.com/YKqso44XOM

Scenes between #NagaChaitanya and #Divyansha is a surprise, Poorna and Anshu 👌👌👌

Seems like a big break for @chay_akkineni is happening.

#Majili is a beautiful film delicately handled by @ShivaNirvana
! 👌
There is Love, there is pain and I felt both!I didn't see the ChaySam I know, I only saw the characters they portrayed. @chay_akkineni
@Samanthaprabhu2
were that convincing! 🙌@divyanshak10
lovely debut 👍 pic.twitter.com/CpauzdQRF5

It looks like #ChySam have taken the post marriage looks to a total different level. They look way younger and prettier than ever before in #Majili. Seriously @Samanthaprabhu2 what do you guys eat?

#majili 👌👌Naga Chaitanya complete actor (surprised by his performance) @Samanthaprabhu2 Garu NC dominated you in every frame(happy for you)..

#Majili -There is maturity in Shiva's writing and his shotmaking, visuals and BGM usage are very similar to that of Mani Ratnam. The film feels like an ode to him. Performances by Samantha,Chay, Rao Ramesh are 👏🏼! The guy who played d friend character has a bright future!

@Samanthaprabhu2 just done watching #majili @chay_akkineni and you are just too awesome. That love and care you showed toward chay made me think I should want a girl like you in my life.😍😘😘

@Samanthaprabhu2 and @chay_akkineni Just watched the movie in Virginia. I lived this movie so much. Mainly the acting by both of you is tremendous. After YMC, we saw the same love even after 10 years. Will be remembered #Majili ♥️🔥🔥🔥♥️

#Majili good movie. Slow first half but good second half makes a decent watch..Amazing performances more than Amazing movie...Clean movie . @MusicThaman u did an a amazing job for the back ground score sir. Respect

Scenes between #NagaChaitanya and #Divyansha is a surprise, Poorna and Anshu 👌👌👌

Seems like a big break for @chay_akkineni is happening. pic.twitter.com/3NHw29gI1X

Must watch ... @Samanthaprabhu2 acted too good in emotional scenes👌... @chay_akkineni superb performance @MusicThaman Bgm big asset to the film especially emotional scenes ✊🏻👍 @ShivaNirvana thanks to you for this wonderful feel good movie 🎥

#Majili is a film that most of us will take back home and will haunt us for sometime. @Samanthaprabhu2 Just wow. @chay_akkineni Just awesome buddy.. @ShivaNirvana terrific writing.. great bgm @MusicThaman. Congrats team. Great film