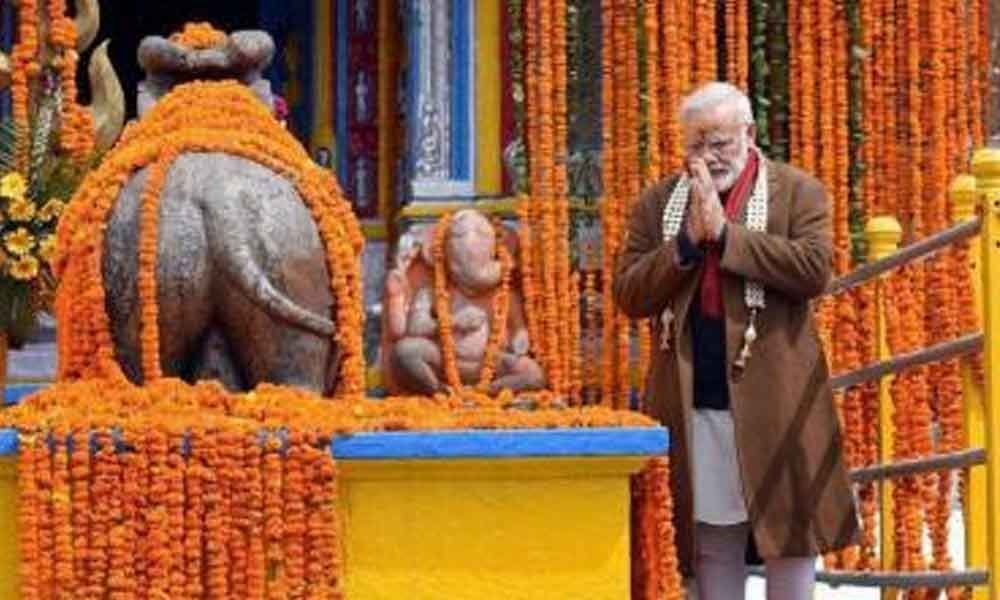 Even as the final phase of Lok Sabha elections has been marred by widespread violence in West Bengal and Defence Minister Nirmala Sitharaman could foresee a massacre after the polls in eastern State tucked between the Himalayas and the Bay of Bengal, a poignant and pensive Prime Minister Narendra Modi offered prayers at the north India's famed Hindu temple in Badrinath, showing his devotion and connect with the noncorporeal.

A day before, on Saturday, the unassuming Prime Minister enchanted millions of his diehard fans and ardent Hindu devotees who contribute to a large percent of votes in the last phase of elections, apparently sending his critics and 'anti-national' elements in the country into their sarcastic best.

He, like a time-tested mystic, clad in traditional Uttarakhand 'pahadi', was seen praying at Kedarnath temple, an ultimate destination for Hindu devotees across the country, and after spending about half-an-hour there, moving to a cave on the temple premises and sitting in meditation.

All in full glare of flashlights and cameras. Thanks to the ever-vigilant media, or the crafty and discerning PR staff in the back office of the Prime Minister, the news was continuously streamed on myriad television channels.

While faultfinders and soreheads slammed the Prime Minister for violating Model Code of Conduct that is in effect due to the ongoing polls, a composed Modi thanked the Election Commission of India for allowing him to visit the temple, despite the apex poll body reminding him of the 'dos' and 'don'ts' of the model code.

A torrent of photographs showing Modi walking on a red carpet, sitting comfortably inside the cave and worshipping at the holy hill shrine was well received by his supporters, it invited the wrath of his detractors.

Hurling of grenades and firing of bullets in West Bengal could not eclipse Modi's spiritual sojourn on TV screens, computer and mobile phone monitors and of course broadsheets.

Well, though his supporters and rivals have several reasons to agree with him or disagree, the fact remains that the democratic values in the country have gone to dogs. Never in the history, the country has seen its highest office influencing all independent bodies including the Central Bureau of Intelligence, Reserve Bank of India, Central Vigilance Commission and of course, the Election Commission of India.

This shows an alarming trend being enforced on the largest democracy in the world.

Of course, barring a few States, the populace of most of India's provinces are ignorant and unenlightened lot, easily carried away by mawkish utterances and religious sentiments, and seriously damaging the secular fabric of the country after each polls.

Cashing on this vulnerability and the bad public memory are forces that are trying to polarise the society. Adding to the deteriorating political equilibrium, the Election Commission has cleared Modi in six cases of alleged violation of Code of Conduct.

Protesting against the commission's unwillingness to reflect his dissent, Election Commissioner Ashok Lavasa skipped the full meeting of the poll body and that substantiate the arbitrary nature of the present EC. Oh mother India! whither goest thou?