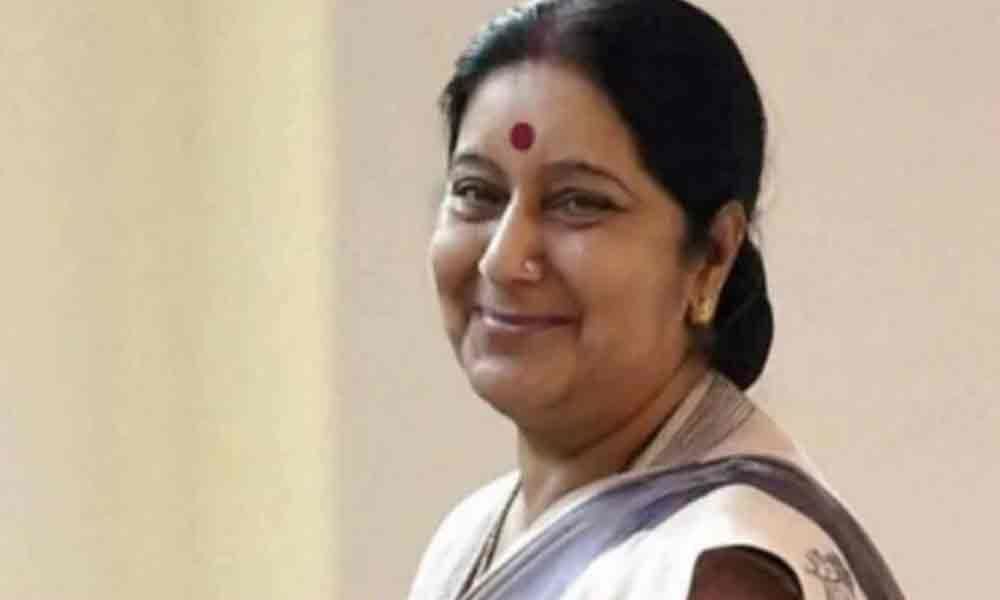 Sushma Swaraj, the poster woman for Hindu womanhood, a beloved leader who donned several hats during her long political career, was known to be a...

Sushma Swaraj, the poster woman for Hindu womanhood, a beloved leader who donned several hats during her long political career, was known to be a complex and fiery woman. She had mercurial presentation and is a lady who came up in politics and proved her mettle despite not being from a political family.

She was known as "Sushma Didi" among media circles. A magnetic personality who was always smiling, ready to hear what the others had to say and an "accessible" and illustrious leader and an orator "par excellence."

She was a no-nonsense woman who would never forgive anyone if she felt slighted. At the same time, she always radiated her charm, her warmth and affection which drew many closer to her. She always maintained excellent relationship with the media.

In the 80's, when L K Advani was the party president, Sushma Didi was a young, promising and upcoming leader. In fact, she was mentored by Advani and it was certainly an emotional moment for the octogenarian leader to give her a tearful send off by attending her funeral.

Whether it is the Central Hall of Parliament or the BJP headquarters or her own home, she would welcome the media with a warm smile, first enquire about their welfare, offer a cup of hot tea and would then get down to business. She was always forthcoming to share the information sought by the media personnel and her statements used to be so convincing that there would be no need for further quizzing.

She was known to be a stubborn and judgmental lady but at the same time was a talented, brilliant and gifted speaker. Born in Haryana, she plunged into political life during Emergency as a student leader. She was studying law at that time. That was the time when the present-day leaders like Arun Jaitley also took a plunge into politics.

"I entered politics as part of an agitational movement led by Jayaprakash Narayan. It was a young movement and I got opportunities. Today it is much more difficult for a woman with no political family backing to make up the ladder so fast," she once said in an interview.

She would be remembered forever for her 2017 speech exposing Pakistan at the United Nations General Assembly in a rousing call for action against State sponsored terrorism. She had launched a scathing attack on Pakistan for "sponsoring terrorists" and she reiterated it in 2018.

The 1996 trust vote speech surely goes down in history as Sushma Swaraj's most powerful speech. Defending the no-confidence motion against the then Prime Minister Atal Bihari Vajpayee, she was equating her analogies to the Ramayan and Mahabharat, as she explained why the saffron party had to step down. And so, it happened! The benches were thumping with praises.

In 2013, she had an unusual duel with the then Prime Minister Manmohan Singh over corruption charges. Both the leaders used Urdu couplets to trade barbs at each other.

Her fiery character once again came to fore when in 2015 she was accused of having lobbied on behalf of former Indian Premier League Chief Lalit Modi. She ripped apart the Opposition with her rebuttal which left them speechless.

Similarly, in case of Kulbhushan Jadhav, a former Indian Navy Officer, it was she who was responsible to see that the case got international attention as she raised it at various platforms in 2017.

Sushma would also be remembered for her activism on Twitter. She had in fact in real terms taken the concept of responsive government to new heights. Just a few days back, she announced that she will "personally monitor" Indian embassies' responses to requests for help and literally responding on the micro-blogging site since 8 January. In fact, it is to her personal credit that addressing the legitimate problems of Indian citizens at home and abroad.

She acquired several terms including the "Supermom of the State", "the Twitter Queen", "the common people's leader" etc. Not only that, the Foreign Policy magazine has included her in the list "for fashioning a novel brand of Twitter diplomacy" and her inclusion in the list of 100 Global Thinkers. Undoubtedly, she was a lady par excellence.