2019 polls may not see much change in NOTA proportion: Experts 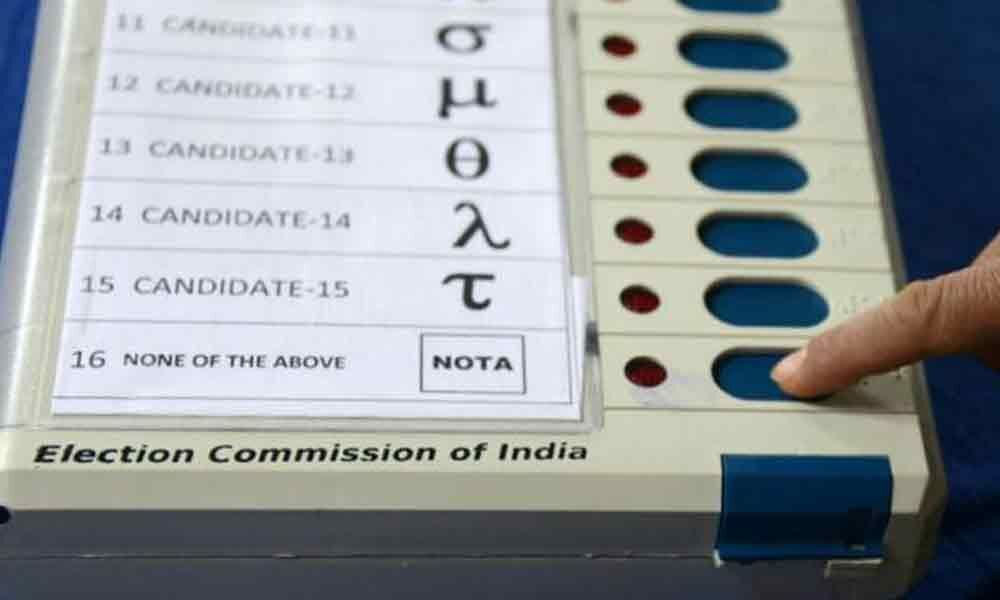 With ballot option NOTA (None of The Above) seen to play a role in poll outcomes, especially in seats won by narrow margins

With ballot option NOTA (None of The Above) seen to play a role in poll outcomes, especially in seats won by narrow margins, there is growing interest in its impact in the 2019 Lok Sabha elections results expected on May 23.

NOTA -- which allows voters to indicate their disapproval of the candidates in the fray -- impacted poll results since its introduction in the Chhattisgarh, Mizoram, Rajasthan, Delhi and Madhya Pradesh Assembly elections in 2013 following a Supreme Court verdict.

It attracts more votes than the combined vote of smaller parties and several political parties blame it for the seats they lose by narrow margins.

Experts however, feel that the proportion of NOTA votes may not increase in the ongoing Lok Sabha polls and that major parties may only benefit from narrow margin victories in varying degrees.

"The percentage of NOTA votes is unlikely to significantly change in these elections from 2014," said Sanjay Kumar, Director, Centre for the Study of Developing Societies (CSDS).

Maj. Gen. Anil Verma (retired) of the Association for Democratic Reforms (ADR), however, felt the percentage of votes polled for NOTA may see a marginal rise this time.

"Urban voters exercise the option more than the rural ones, who are not aware of it. But for its better implementation, NOTA needs to be given more teeth. The option must give the voters the ability to reject candidates..." he said.

Referring to the impact of the option, ADR's Jagdeep Chhokar said that in many constituencies in both Lok Sabha and Assembly elections, the votes polled under NOTA were more than the difference of votes between the winning and losing candidates.

He however, added that NOTA had not been implemented properly by the Election Commission.

"What the Supreme Court said in its 2013 judgment -- that political parties would be compelled to put up better candidates if more and more voters opt for NOTA -- has not been implemented in letter and spirit.

"The EC should follow in the footsteps of the Haryana and Maharashtra State Election Commissions, which last year announced that the candidates in the fray would be replaced if more voters opt for NOTA," Chhokar said.

According to ADR data, there were 60,02,942 (1.08 per cent) NOTA votes in the 2014 elections, which was the winning margins of many constituencies put together.

The option has collectively secured 1.33 crore votes in all the Assembly and Lok Sabha elections held since it was introduced in 2013. On an average, it secured 2.70 lakh votes in the Assembly elections between 2013 and 2018.

According to a survey done by the CSDS during the 2014 Lok Sabha elections, the upper caste voters may have chosen NOTA more than any other caste group.

But the option saw a declining trend in the 2018 Assembly polls in Madhya Pradesh, Rajasthan, Chhattisgarh and Mizoram, said Kumar said.

In Telangana, there was a marginal increase from 0.7 per cent to 1.0 per cent.

However, in some elections -- like bypolls in Bawana constituency of Delhi and Nandyal constituency in Andhra Pradesh in 2017, NOTA got the fourth highest number of votes.