How effective are Muslim leaders in TS? 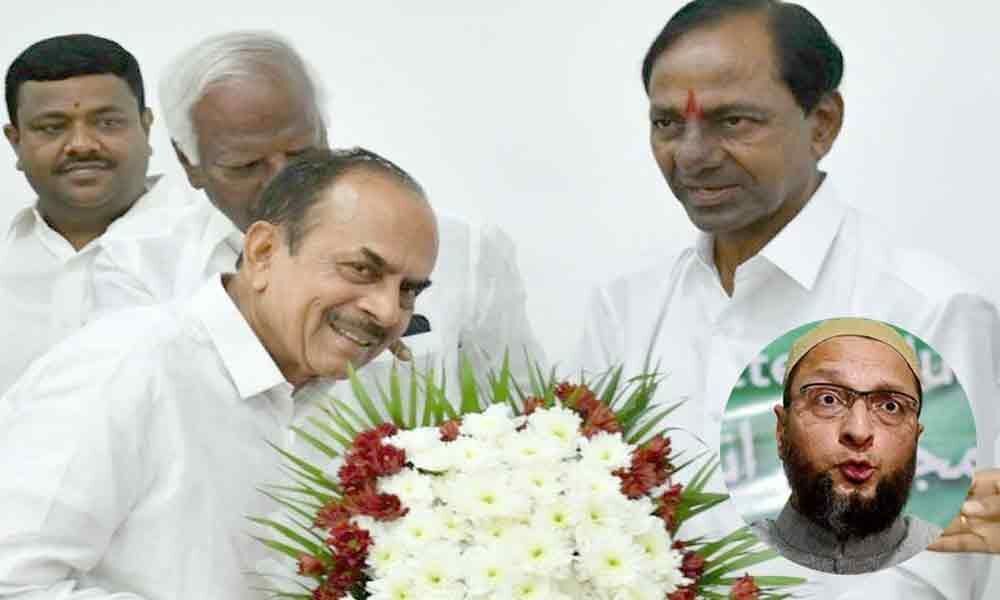 The people of Kashmir Valley had celebrated the appointment of People’s Democratic Party(PDP) leader as the Home Minister of the country by the VP Singh government at the Centre in 1989.

The people of Kashmir Valley had celebrated the appointment of People's Democratic Party(PDP) leader as the Home Minister of the country by the VP Singh government at the Centre in 1989.

But it turned out to be the biggest disappointment for them.

Security forces inflicted unprecedented atrocities on them with mass arrests, firing on funeral processions and extra-judicial killings and disappearances.

Perhaps the same feeling is palpable in Telangana these days. Home Minister Mohammad Mahmood Ali has turned out to be ineffective in protecting the interests of Muslims who form 15 per cent of the population in the State.

As understood among the political analysts, that the appointment of a Muslim to the second most important post in the government was just a ploy to divert the attention of the community from the promise of 12 per cent reservation and avoid the question of not fulfilling the earlier 4 per cent reservation given during the Congress government in the State.

And his appointment worked well. The Muslims cutting across party lines celebrated the moment and praised Chief Minister K Chandrashekar Rao for his generosity and called him the biggest secular CM in the country.

However, as the BJP, which was supporting the VP Singh government from outside, had called the appointment of Mufti Mohammed Sayeed a political gimmick, in the same way Home Minister Mahmood Ali has turned out to be only a show boy of the ruling TRS.

When there were Assembly and Parliament elections, both Mahmood Ali and MIM president and MP Asaduddin Owaisi were busy in mobilising the Muslims to vote for the TRS en bloc.

They had cited the schemes that were introduced by the TRS government for the community like Shaadi Mubarak, opening of some schools and organising yearly Iftar party and distributing Rs 400 worth clothes and Rs 1,000 to Imams of mosques on the occasion of Ramzan.

However, both the leaders deliberately forgot to mention the fate of 12 per cent reservation to Muslims in education and jobs as promised by the State government in the first term.

Even they did not tell people what happened to 4 per cent reservation that was given to the community by the preceding Congress government in the State.

Obviously, both were doing their duty. Mahmood Ali, who could not even win his own seat in the Assembly elections, was at mercy of TRS chief K Chandrashekar Rao who had been using him as the Muslim face of the party.

Moreover, he was thankful to him for appointing him the Deputy Chief Minister in the last government.

On the other hand, after jumping off the sinking ship of the Congress in the State, MIM needed an alliance with the TRS which was the dominant party in the new State of Telangana.

Therefore, to protect their seven Assembly seats and securing one Lok Sabha seat, the MIM leaders particularly its president Asaduddin Owaisi forgave all sins of the State government.

When Chief Minister Chandrashekar Rao announced raising the Muslim reservation from 4 per cent to 12 per cent, it was evident that he did not mean so since the move hinged on the approval of the BJP government at the Centre which would never oblige the State to antagonise its core Hindu vote bank.

After Assembly and Parliament elections, local bodies' polls are being held and then municipal corporation polls will follow.

In fact, these Muslim leaders have lost their importance to their community members in the State. In their words, they are now weary of this stupid, meaningless and constantly repeated farce.

These rituals of democracy bring no spring in their lives and they continue to suffer as they had been.