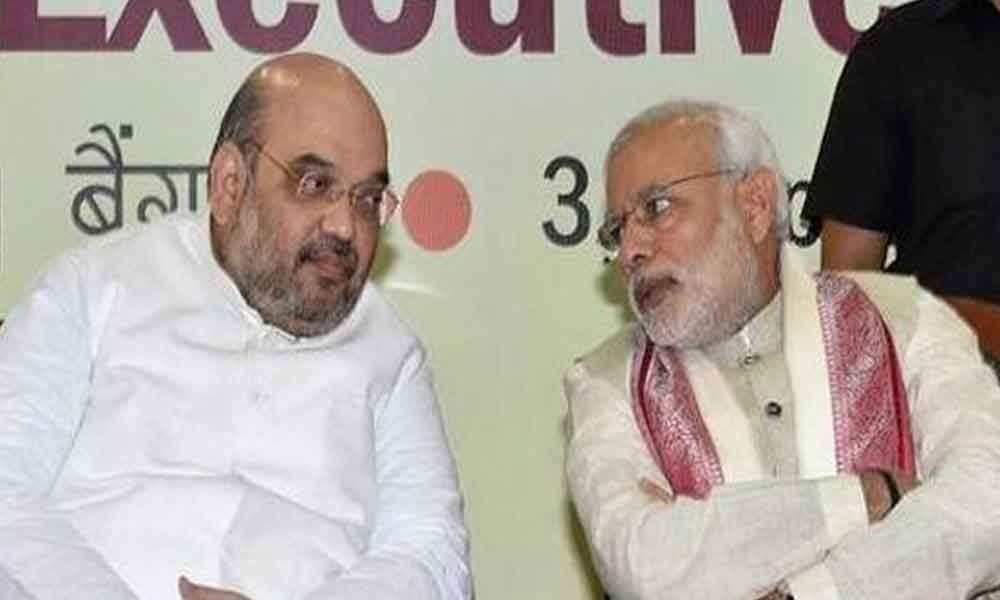 Prime Minister Narendra Modi's actual countdown for revoking Article 370 and bifurcation of the State of Jammu and Kashmir began during the third week...

Prime Minister Narendra Modi's actual countdown for revoking Article 370 and bifurcation of the State of Jammu and Kashmir began during the third week of June, when he chose 1987 batch IAS officer of Chhattisgarh cadre, B VR Subramanyam, as new Chief Secretary of Jammu and Kashmir.

Subrahmanyam, who had worked as Joint Secretary (PMO) with the Prime Minister earlier, was one of the key officials in Modi's Mission Kashmir.

Before the beginning of the Budget Session, Shah had briefed Rashtriya Swayamsevak Sangh (RSS) chief Mohan Bhagwat and his aide (General Secretary) Bhaiyaji Joshi about the Centre's determination to revoke Article 370 and subsequent bifurcation of Jammu and Kashmir into two separate Union Territories.

After legal consultations, Shah focussed on the implications of the revocation of Article 370 on the valley's law and order situation. Sources close to Shah revealed that on the Prime Minister's suggestion, Shah then had a couple of meetings with National Security Advisor (NSA) Ajit Doval.

The sources said that once Shah had reviewed the situation in Kashmir himself, Doval was sent to Srinagar to assess the situation from a security point of view.

The NSA camped there for three days. Then on July 26, the decision to curtail the Amarnath Yatra was taken. Later recall of all tourists from the valley was also suggested by the NSA.

Apart from this, an additional 100 companies of the central paramilitary were also rushed as back-up to the prevailing security apparatus.

Jammu and Kashmir Chief Secretary Subramanyam, who was in the loop with the Prime Minister's Office (PMO) and the Ministry of Home Affairs (MHA) was given the blueprint of several security measures to be taken on ground zero - use of satellite phones by key police, paramilitary and administration officials; deployment of QRTs in sensitive urban and rural pockets across South Kashmir; and a high vigil at LoC by Army, apprehending mischief from across the border.

Earlier, on the Delhi front, Shah had another key team set on the job, which included Rajya Sabha members like Anil Baluni and Bhupendra Yadav.

The team was tasked to muster the support of fellow members of the august House, where BJP fell short of a majority.

Thus, giving a big boost to the BJP in the upper House.

At the eleventh hour, the team also managed BSP leader Satish Mishra to support the move related to Article 370 and bifurcation of the State.

In the meantime, Amit Shah also had closed door meetings with key journalists (having access in the MHA) to be balanced in reporting while touching highly sensitive issues, which have international implications.

Shah's objective was to maintain top secrecy, till he introduces the Bill, and breaks the historical news on August 5, on the floor of Parliament itself.

Sources said that by August 2, Shah was confident that his party had enough support in the Rajya Sabha and would introduce the historical Bill (of bifurcation of Jammu and Kashmir) in the Upper House by Monday.

Subsequently, a whip was issued by the BJP instructing all members to remain in their respective House hinting them that important bills were expected to be passed.

Highly placed sources revealed that finally on the weekend, it was decided by Modi and Shah to convene a meeting of the Cabinet at the PM's residence on Monday, to disclose Mission Kashmir's objective to Ministers and pass a resolution thereof, prior to the proceedings of the House.

Similarly, the Ministry of Law and Justice was tasked for prompt issuance of notification by the President of India on the revocation of Article 370.

After Shah introduced the Bill amid chaos in the Rajya Sabha on Monday, a BJP MP reacted: "Shah's mission has never been defeated. He is the new Sardar (Vallabhbhai Patel)."