The sad state of engineering colleges 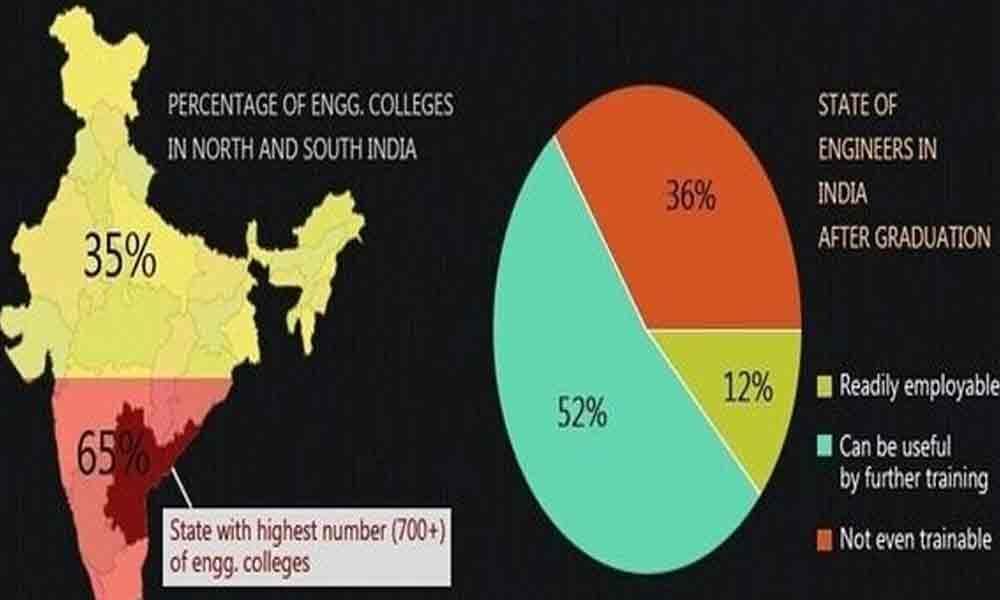 Engineers make the world! This aphorism did the rounds when that line of work was limited to a few talented people. However, I wonder if we can rely...

Engineers make the world! This aphorism did the rounds when that line of work was limited to a few talented people. However, I wonder if we can rely upon such engineers who get passed out from universities but are short of acceptable acquaintance — most of the engineers, passing out from engineering colleges, do not even get conversant with the basics of the subject even after undertaking four long years of regular coaching. It is fairly common in states like Andhra Pradesh, Karnataka, Telangana, and Maharashtra that engineers who are out for the count from most of the engineering colleges treasure no market value.

The world's top fifty universities in engineering and technology in preceding many years do not take in any Indian university or college in India. Indian institutes have no place in the recent Higher Education World Reputation Rankings of the top 100 institutions — the shareholders of the entire ranking segment comprise of the many BRIC countries, except India.

The contravening view might be that we can handily blame it on the bias, or modestly disregard the global ranking. What has been pragmatic in the contemporaneous scenario is — while the government-run institutions have their stake of challenges, the private institutes and universities, perceived to be a ray of hope, seem to be less alarmed in refining eminence.

Going by statistics that are consistent with AICTE figures, in 2016-17, against the total intake capacity at the undergraduate level of engineering, the entire enrolment was just 50.1 per cent — 2.1 per cent less than that of the previous academic year. It is a matter of grave concern that AICTE has approved the reformist closing of more than 410 colleges across India — from 2014-2015 to 2017-2018.

According to a study carried out by Aspiring Minds, an employability assessment company, 95 per cent of engineers in the country were not fit for software development jobs. The study enticed that only 4.77 per cent of engineers could write the correct logic for a programme — a smallest possible prerequisite for any programming job. Probably, this could have been the reason that many below average engineering colleges have applied for closure.

Palpably, since 2016, the number of engineering seats has been on the enervation. It is no wonder that a decade ago report of McKinsey had highlighted the same fact. According to the captioned report, just one-fourth of engineers in India were only actually employable. In a nutshell, most engineering colleges are not capable of offering a job-oriented engineering education to their students.

Of course, some premier engineering institutions like IITs and NITs are exceptional in this regard. Though many engineering colleges mushroomed in the past, having gauged it for self, the substandard colleges are slowly shutting down.

Near-term to my standpoint, there is no doubt that talent cannot be surpassed by anything — and a bright student will make a way for him in any sort of adversity and can ubiquitously establish self. The problem here is with the students who buy education. Education is not a diurnal service that can be bought just in the souk.

Nevertheless, the present education has made it possible. If a person is ready to spend a huge sum, management quota seats are available for sale — mayhap the jobs as well. Just imagine a person getting himself employed with the influence of the same money and getting convoluted him in the engineering works. Isn't the feeling itself so trembling?

Engineers like Sir Mokshagundam Visvesvaraya brought laurels to the engineering profession. He was time-honoured even with the Indian Republic's highest civilian honour, the Bharat Ratna in 1955. Also, he was knighted as a Knight Commander of the Indian Empire (KCIE) by King George V, for his contributions to the public good. Every year, September 15 is celebrated as Engineers' Day in India in his memory. He is held in high regard as an unsurpassed engineer in India.

I wonder how a person could be captivated in the engineering course — as such to any other programme — if a student does not have any sort of aptitude for that option. In this locale, I recollect a burlesque from a famous Telugu news daily wherein a person clarifies another that he was sure that his son would get an engineering seat, but he was worried if his son would get a seat in B.A. course or not.

This was promulgated when it was the opening period of the mushrooming of engineering colleges in the erstwhile Andhra Pradesh — in the mid-1990s. At that moment it was a funny sketch. But, nowadays the same turned into reality.

If there is no control over such education, surely that day is not far away when akin to engineers being produced from the engineering colleges, we get doctors produced from the medical colleges that are not even aware of the human anatomy after completing the entire course. It is rather a serious threat to the society and needs to be addressed timely before a great loss occurs.

83- The most anticipated film of Deepika Padukone First look is...
We use cookies for analytics, advertising and to improve our site. You agree to our use of cookies by continuing to use our site. To know more, see our Cookie Policy and Cookie Settings.Ok