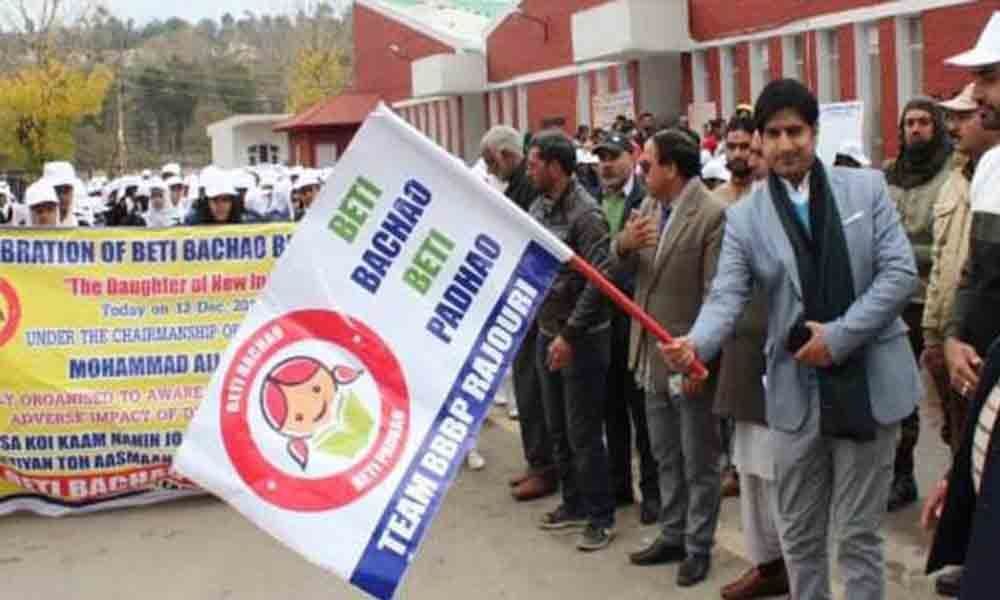 With an aim to eliminate the menace of female foeticide in Jammu and Kashmir, 'Beti Bachao Beti Padhao' campaign was launched in Udhampur on Monday.

With an aim to eliminate the menace of female foeticide in Jammu and Kashmir, 'Beti Bachao Beti Padhao' campaign was launched in Udhampur on Monday.

The event was attended by all the officers of District Administration, frontline workers of ICDS Department and prominent citizens of the district Udhampur region.

To spread awareness amongst the masses in this regard, the Udhampur administration also launched a cyclothon. The event was flagged off by the Major General Madhuri Kanitkar.

"Programme like these are motivating girls to achieve their goals. People from remote areas have also come today to attend this programme. More programme like these should be organised on regular intervals to improve the sex ratio," said Raghunandika, a student.

"Beti Bachao Beti Padhao Andolan has brought revolution in the state. I am very happy today that girls are moving forward. Many of them this year have also been selected in government jobs," another student Ananya Rathore told ANI.

During the event, an awareness van was also flagged off to spread out the message and around 40 youths were declared as "Yuva Vahini" who will act as key messengers for spreading the message at the grass-root level.

Besides, 20 meritorious girls from remote areas were rewarded with a cash reward of Rs 5000 each and 10 newborn girl children were also felicitated with Mamta kits.

Government of India has introduced the Beti Bachao, Beti Padhao scheme for survival, protection and education of the girl child. It aims to address the issue of declining Child Sex Ratio (CSR) through a mass campaign across the country targeted at changing societal mindsets and creating awareness about the criticality of the issue.

The Scheme will have focused intervention and multi-sectoral action in 100 districts with low Child Sex Ratio.

The village that succeeds in attaining a balanced sex ratio will be awarded Rs 1 crore this strong incentive will reduce the declining CSR ensuring that the girl child gets equal opportunities in all walks of life. (ANI)