An artistic offering to Lord Buddha 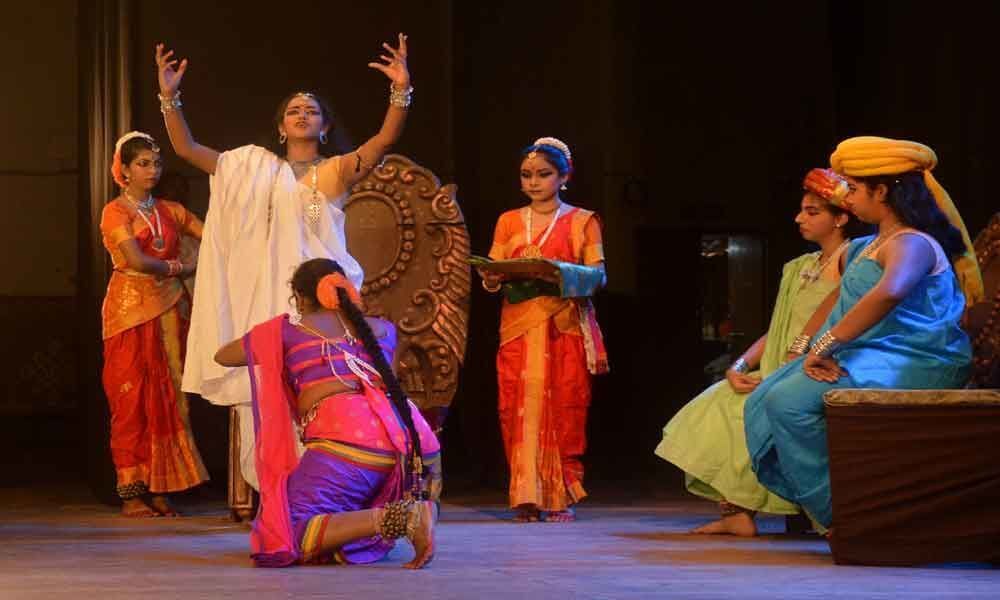 On May 17, to celebrate Buddha Purnima, the Department of Tourism, Govt.of Telangana organised an exhibition of Buddhist relics and a Kuchipudi dance ballet “Gupta Vasavadatta” by Guru Dr. Yashoda Thakore and group.

On May 17, to celebrate Buddha Purnima, the Department of Tourism, Govt.of Telangana organised an exhibition of Buddhist relics and a Kuchipudi dance ballet "Gupta Vasavadatta" by Guru Dr. Yashoda Thakore and group.

The intent was to bring Buddhist heritage into focus. Telangana is very rich in its Buddhist heritage; some of the prominent Buddhist sites are at Nagarjunakonda, Badankurthi, Kotilingala, Phanigiri etc.

Well mounted laminated photographs of the archeological and other remnants at these sites were displayed for informative purposes to the public at the gallery in Ravindra Bharathi.

Kotilingala was a very important ancient site discovered by Prof VV Krishna Sastry, who happens to be well known author. Ceramic ware and other objects from Brahmi and Maurya periods were discovered there. Several photographs on display showcased the valuable Buddhist tradition of the State. A small collection of books on the subject of Buddhism were displayed for sale.

The Historical ballet with a Buddhist theme which followed had lyrics by Bala Tripura and music by Murali and choreography by Dr. Yashoda Thakore.

The inaugural lamp was lit by bureaucrat Dinakar and the reverend Buddhist Acharya, who warmly greeted the audience. The highlight of the Vaisakha Purnima day is that the Lord was born, attained enlightenment and passed away on this same day. Hence it is held to be triply sacred.

The opening of the dance ballet was a brief piece by three young students in red and gold costumes elucidating the virtues of the Sangha's rightful thinking, which swept away evil attitudes.

The majestic sabha was depicted with the Gupta Monarch seated on a royal throne with his courtiers praising him by reciting his titles. The dancer dressed in simply elegant and gracefully folded white attire looked very regal indeed.

She radiated a majestic personality perfectly befitting the role. Yashoda Thakore in the title role of Vasavadatta veiled as in a typical Pravesa Daruvu appeared on stage behind a curtain held by attendant dancers.

Her dance epitomized a bygone era giving grace and charm to the exquisite character. The audience felt that her footwork was equal to that of the legendary artiste she portrayed.

The removal of her veil revealed the celebrated court dancer in all her glory. She is approached by the members of the court, who vie with one another in offering her unlimited riches in return for her favour but she spurns them all.

Then enters the monk Upagupta, a stately role played by Hari Mangalampalli with serene calm in saffron hued robes. Vasavadatta is instantly struck by his presence and falls in love with him. She gives up food, is unable to sleep and even finds it impossible to continue dancing! All the efforts of her attendants to console her are fruitless.

Her maid then approaches Upagupta to plead with him to come to her mistress but is turned away with the answer that the time for that has not yet come. Vasavadatta entreats him offering herself and all that she possesses to no avail. The king himself is unhappy that his court dancer is submerged in grief unable to fulfill her vocation.

In order to occupy her tortured mind a wandering Vasavadatta comes across a sculptor making beautiful strikingly lifelike statues. Sampreeti excelled in this role aided by a flowing black costume giving a vibrant charm to her gestures. Vasavadatta challenges the sculptor to copy her pose in making another sculpture.

Then occurs the interesting scene showing the chiselling of the statue itself so imbued with reality as to confuse onlookers, which was essayed by Sindhuja, who excelled in the meticulous depiction of the statute poses required.

The striking tragedy of the beautiful Vasavadatta being struck by a hideous disease then occurs. The sculptor who on coming to know of her state visits her to return the jewelled bracelet given earlier as a reward for his attainment.

Now the very same people who desired her in her past glory revile and banish her from the court. Yashoda's expressive mastery of abhinaya reached the heights in her portrayal of extreme pathos in this scene.

The fateful climax forseen by Upagupta brings him to console and aid the suffering Vasavadatta in her dire distress. The ballet ended with Vasavadatta entering the Sangha after listening and understanding the enlightening Astangamarga discoursed by the Lord Buddha himself depicted in a dignified manner by Apeksha.