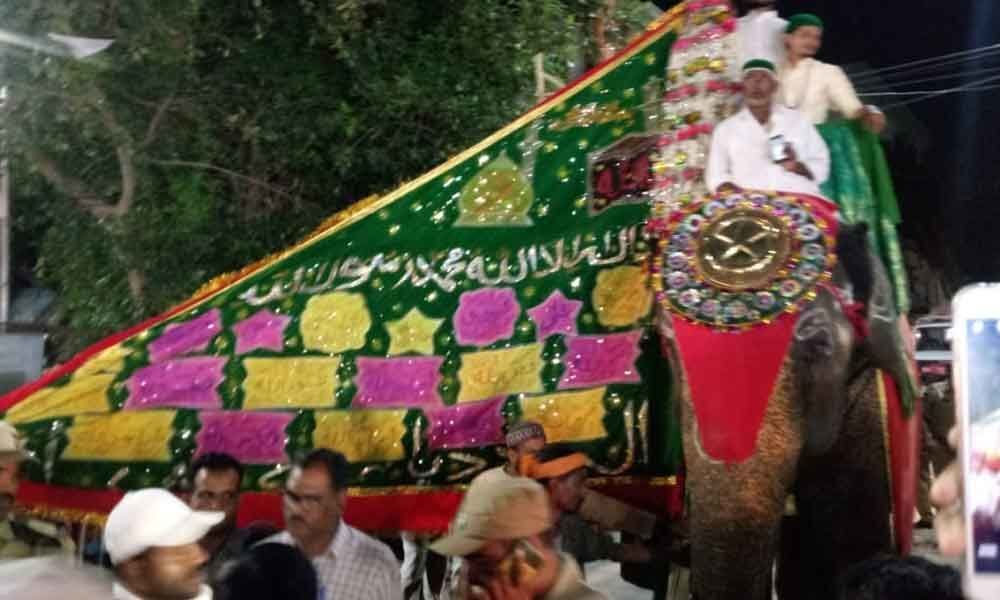 The annual procession of Giarhveeh Shareef concluded on a grand note, after the elephant ‘Sudha’ from Karnataka took part in the event on its second visit to the city from Karnataka after Bonalu.

Charminar: The annual procession of Giarhveeh Shareef concluded on a grand note, after the elephant 'Sudha' from Karnataka took part in the event on its second visit to the city from Karnataka after Bonalu. The organisers had to spend Rs 3 lakh from their pockets, as the State government unlike Bonalu festivities and Moharram's Bibi-ka-Alam juloos failed to support the event from its coffers.

Organised by Hazrath Ghouse-e-Azam Welfare Society where more than 10,000 Sunni Muslims took part, this was first time in decades the event concluded without participation of local elephant, owing to the High Court judgment which barred availing pachyderms from Zoo in the processions including Bonalu and Moharram.

According to society, the court judgement has not only impacted the festivities of Giarhveeh Shareef of Hazrath Syedna Ghouse-e-Azam Datagir, but also other important processions of Bibi-ka-Alam and even the Bonalu this year. Until the previous year, all these processions were availing of the services of zoo's elephant Rajani.

"In a recently held Bonalu festivities in Old city the procession was led by elephant Sudha brought from Karnataka. After its friendly performance it has also been engaged by Bibi-ka-Alam (during Moharram). Hence we decided to engage it for the Giarhveeh Shareef procession, which was taken out in Old City on Wednesday", said Moosa Khan Quadri, President Hazrath Ghouse-e-Azam Welfare Society.

Speaking to The Hans India Moosa Khan said that as the government is helping in traditional festivities by providing animals and funds, the Society representing Sunni Muslims also demand that even this festival should also declared as a State festival, as it is celebrated on a grand note around the world. He also demanded the government to provide animal as well as funds for the festival.

The Giarhveeh Shareef procession is part of the history for more than 45 years and it remains the third important procession after being allotted the pachyderm. It is organised on the occasion of birth anniversary of Hazrath Syedna Ghouse-e-Azam Datagir, a revered saint of India. The procession is generally attended by thousands of devout Sunni Muslims.

On Wednesday, the procession started from Chilla Mubarak, Irani Galli and passed through Panjesha, Etebar Chowk, Kotla Alijha, Sardar Mahal and Charminar and thereafter returned from Charminar via Gulzar Houz, Machli Kaman. Moosa Khan also said that, after the procession and celebration a langar (community kitchen) is generally organised, and this time it would be organised on Friday.