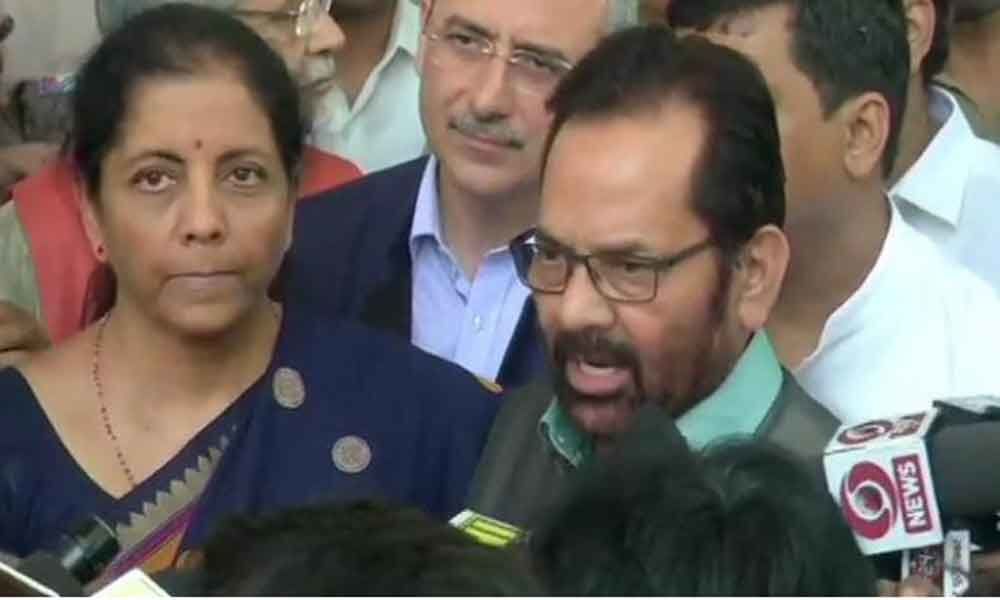 New Delhi: The BJP Friday moved the Election Commission seeking action against Rahul Gandhi for his "abusive" and "completely untrue" comments against Prime Minister Narendra Modi, accusing the Congress president of attributing words to the Supreme Court in the Rafale case that it never said.

Senior BJP leader and Union minister Nirmala Sitharaman also expressed her party's "disappointment" with the poll watchdog, saying it has looked the other way despite their repeated pleas to it against Gandhi for his "baseless" allegations against Modi.

A BJP delegation, including Sitharaman, Union minister Mukhtar Abbas Naqvi and its media head Anil Baluni, submitted to the EC a memorandum in which the saffron party also accused the Trinamool Congress of poll rigging in West Bengal during the first phase polling of the general election on Thursday.

Pointing to Gandhi's remarks Wednesday that the apex court has acknowledged that Modi is a "thief" and that he gave Rs 30,000 crore to industrialist Anil Ambani, Naqvi said such "lies" and "baseless allegations" are not only violative of the Model Code of Conduct but also fall under "corrupt practices", as described in the Representation of People Act. The court had never said such a thing, he said.

"Congress president Rahul Gandhi is using abusive and such strong statements which are totally untrue, calling repeatedly the prime minister a 'chor' (thief) and also putting words in the mouth of Supreme Court," Sitharaman told reporters.

Gandhi has been making such allegations without any evidence, she said, adding that the BJP has approached the EC three times so far against the Congress president. The BJP felt "let down" that the EC has not taken cognizance of its complaints against him, she said.

Taking a dig at Gandhi, Naqvi said the "brand new president" of an old party like the Congress has crossed all boundaries with his utterances.

The apex court had on Wednesday allowed leaked documents to be relied upon by petitioners seeking review of its Rafale judgement and dismissed the government's preliminary objections claiming "privilege" over them. Gandhi had then claimed that the court has accepted that Modi was a thief.