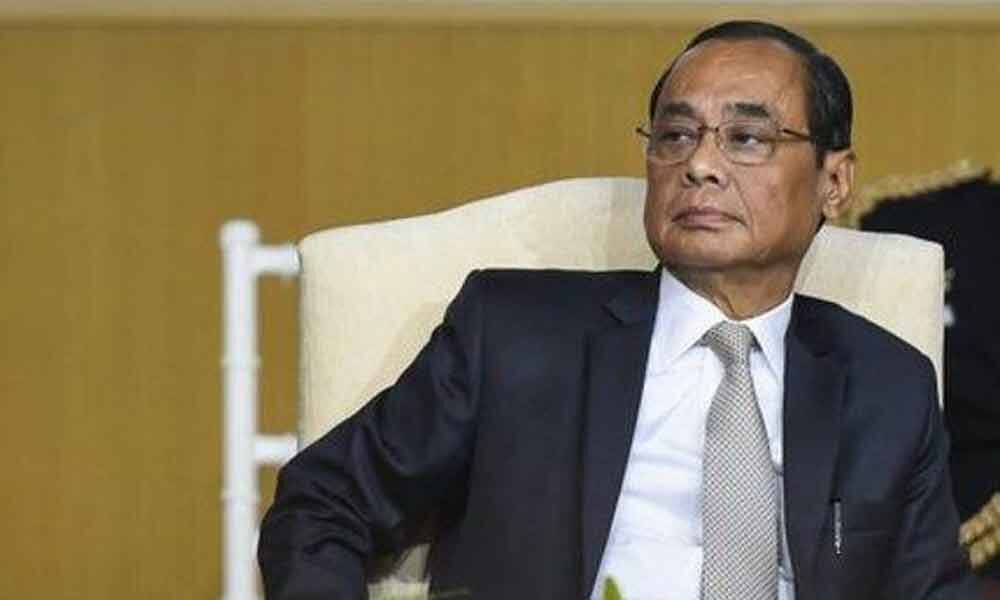 New Delhi: Allegations of sexual harassment have cropped up against Chief Justice of India Ranjan Gogoi prompting him to convene an urgent extraordinary hearing on Saturday and assert that the charges by a former apex court staffer were "unbelievable" and part of a conspiracy by some "bigger force" to "deactivate" the CJI's office.

As the allegations by the former woman staffer who had worked at Gogoi's home office in Delhi and dating back to October stunned the judiciary, Gogoi said he would not stoop too low even to deny them.

At the hurriedly called hearing in Court No 1 presided by him after the allegations were carried by some news portals based on the affidavit by the woman, the apex court said it is leaving it to the "wisdom of media" to show restraint and act responsibly so that independence of judiciary is not affected. The court, however, decided not to issue any gag order.

A three-judge special bench headed by Gogoi was constituted after a sworn affidavit by the woman, copies of which were sent to the residences of 22 apex court judges, became public. There was no immediate reaction from the government or any major political party.

The court held the hearing for about 30 minutes during which Gogoi said independence of judiciary was under "very serious threat" and "unscrupulous allegations" of sexual harassment had been levelled against the CJI as some "bigger force" wanted to "deactivate" the office of the Chief Justice.

He did not elaborate on who the "bigger force" was that he was referring to. The CJI also said that the woman had a criminal record and two FIRs were lodged against her.

The court said the media should not publish the woman's complaint without verifying its truth.

The CJI said this issue has cropped up when a bench headed by him is scheduled to hear "many, many sensitive cases" next week and this was also last few weeks of the Lok Sabha elections. He did not name any of the cases.

Besides the CJI, the bench also comprising justices Arun Mishra and Sanjiv Khanna, said the "bigger force" behind the controversy has the potential to shake the faith of public in the judicial system. Though the CJI was heading the bench, he left it to Justice Mishra to take a call on passing any judicial order.

Dictating the order, Justice Mishra said, "Having considered the matter, we refrain from passing any judicial order at this moment, leaving it to the wisdom of the media to show restraint, act responsibly as is expected from them and accordingly decide what should or should not be published, as wild and scandalous allegations undermine and irreparably damage reputation and negate independence of judiciary."

"We would, therefore, at this juncture leave it to the media to take off such material which is undesirable," the order said.

Justice Gogoi and three other senior most judges of the apex court at an unprecedented news conference on January 12, 2018 had staged a virtual revolt against his predecessor Justice Dipak Misra on the issue of allocation of sensitive cases.

During the hearing, the CJI said "unbelievable" allegations have been levelled against him and "I do not think I should stoop too low even to deny these allegations. But that comes after 20 years of selfless service as a judge".

"Nobody can catch me on money.

People have to find something and they have found this," the CJI said, while making it clear that he has a bank balance of Rs 6.80 lakh apart from around Rs 40 lakh in provident fund after being in service for around two decades.

Justice Gogoi, who assumed the office of the CJI on October 3, 2018, will retire on November 17.

The apex court registry in a notice earlier in the day said a three-bench headed by the CJI was being set up to deal with a "matter of great public importance touching upon the independence of judiciary".

Confirming that a letter by the woman has been received by several sitting judges, Supreme Court Secretary General Sanjeev Sudhakar Kalgaonkar said all the allegations made by the woman are mala fide and have no basis.