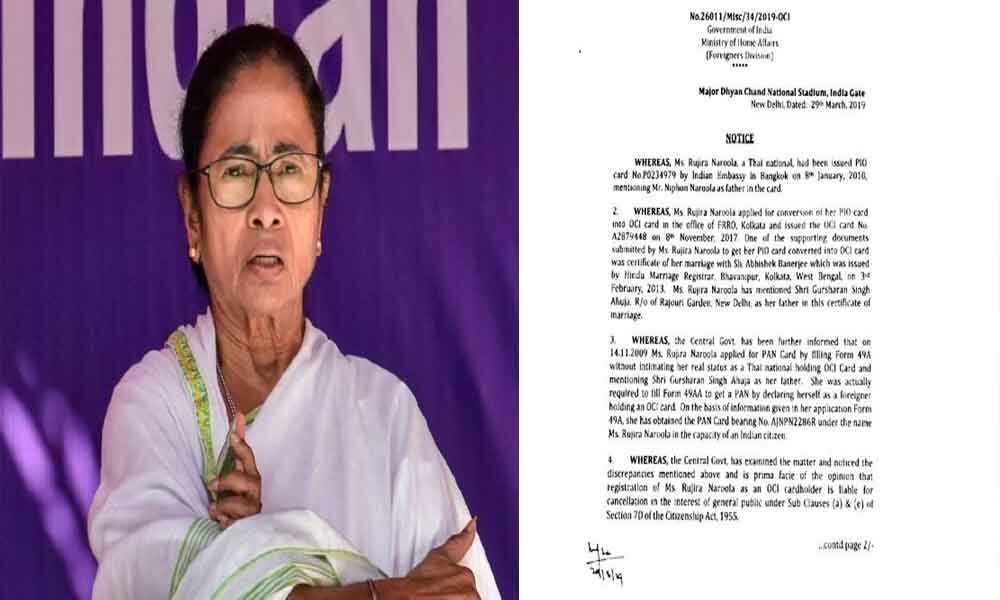 The notice added that the registration of Rujira Naroola as an OCI cardholder is liable for cancellation in the interest of general public.

Kolkata: The Foreigners Division of Ministry of Home Affairs (MHA) has issued a notice to the wife of Trinamool Congress leader and Mamata Banerjee's nephew Abhishek Banerjee for making false representation and concealing material facts while submitting documents before competent authorities to get her Overseas Citizenship of India (OCI) and Permanent Account Number (PAN) card.

Abhishek's wife Rujira Naroola has been asked why she filled Form 49A without mentioning that she is a Thai national holding an OCI card. As per MHA, Naroola was supposed to fill 49AA to get a PAN by declaring herself as a foreigner holding an OCI card.

She has been asked to reply in 15 days as to why she had made false representations and concealed facts.

"The Central Government has been further informed that on 14.11.2009 Ms Rujira Naroola applied for PAN card by filling Form 49A without intimating her real status as a Thai national holding OCI card and mentioning Shri Gursharan Singh Ahuja as her father. She was actually required to fill Form 49AA to get a PAN by declaring herself as a foreigner holding an OCI card. On the basis of information given in her application Form 49A, she has obtained the PAN card bearing no ****** under the name Ms Rujira Naroola in the capacity of an Indian citizen," the MHA said in the notice.

The notice added, "Whereas the Central Government has examined the matter the discrepancies mentioned above and is prima facie of the opinion that the registration of Ms Rujira Naroola as an OCI cardholder is liable for cancellation in the interest of general public under sub clause (a) & (e) of section 70D of the Citizenship Act, 1955."

"Ms Rujira Naroola, an OCI Cardholder, is hereby called upon to show cause as to why she has made false representation and concealed material facts while submitting documents before the Competent Authorities to get her OCI and PAN cards," it read.

The MHA in the letter also asserted that if no reply is received within 15 days from the date of issue of this notice then the appropriate decision in the matter would be taken on merit on the basis of available records by the Central Government.