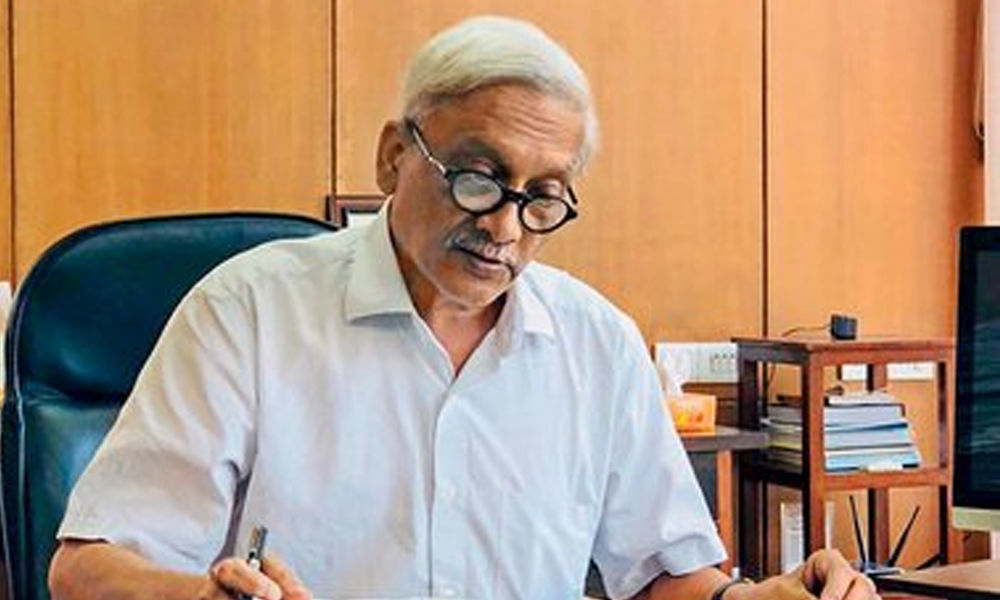 Manohar Parrikar has been recognised as the "original aam aadmi" by fellow his politicians, journalists and Goans.

NEW DELHI: On Sunday, the chief minister of Goa Manohar Parrikar had passed away at the age of 63, after battling pancreatic cancer for over a year. Sources have said that, Parrikar was put on life support system late Saturday night. Manohar Parrikar has been recognised as the "original aam aadmi" by fellow his politicians, journalists and Goans.

The Centre declared Monday to be the national mourning to grieve Manohar Parrikar. PM Narendra Modi, Home Minister Rajnath Singh and BJP party president Amit Shah will be attending the last rites of Parrikar held in Panjim. National flags will be hoisted at the half-mast in Delhi and across the capitals of all the other states and union territories.

In Goa the BJP-led alliance did not form any opinion regarding the next chief minister, a necessary move which has to be made due to the death of Manohar Parrikar.

The BJP MLA Michael Lobo said that, the Union minister and senior BJP leader Nitin Gadkari, who had arrived during the early hours of the day, could not secure an agreement between the saffron party and its alliance partners within the state.

However, Gadkari was unavailable for comments, Lobo also added that, Maharashtrawadi Gomantak Party (MGP) MLA Sudin Dhavalikar wanted to be the chief minister because of which the discussions are on hold.

The High Court of Bombay at Goa and the other District Courts in the state will be remaining closed in view of passing away of Goa CM Manohar Parrikar.

Manohar Parrikar had an eventful tenure as the defence minister, by putting an emphasis on the indigenisation within the defence sector to make sure that a home- grown fighter jet would join the air force fleet, from the defence forces who carried out a surgical strike to the signing of the Rafale deal. Within his almost three-year tenure, he saw the Army conducting the surgical strike in September 2016, after a terror attack which had claimed lives of 19 soldiers in Uri in Jammu and Kashmir.

Bollywood celebrities such as, Amitabh Bachchan, expressed his grief on social media at the passing of Manohar Parrikar. Amitabh Bachchan tweeted, "Manohar Parrikar CM of Goa, passes away .. a gentle , soft spoken simple minded person .. respected .. fought his illness with dignity and great spirit .. had on a few occasions spent some time with him .. a soft smile always adorned his face .. sad with the news .."

On Monday Kiran Bedi tweeted a picture of the National Flag flying half mast over the Raj Niwas in Pondicherry.

"National Flag flying half mast over the Raj Niwas, Puducherry, condoling the passing away of Manohar Parrikar," she tweeted.

Vijai Sardesai, the chief of the Goa Forward Party had said that, "We had given support to Manohar Parrikar, not BJP. Now that he is not anymore, options are open. We want stability in Goa, we don't want dissolution of house. We'll wait for the decision at the BJP legislature meeting and then take the next step."

According to a CMO release, Manohar Parrikar will be awarded a state funeral.

"We have given some options to the leadership, they have to get back on this. Sending assembly in suspended animation is not up to us. It's not easy to fill parrikar's shoes," said Goa Forward Party chief Vijay Sardesai after meeting with Gadkari.

All official programmes of the BJP including the CEC which is scheduled for tomorrow has been cancelled, following the demise of Former Defence Minister and Goa CM Manohar Parrikar.

In a statement, the Government of Goa said, "As a mark of respect for departed soul of Manohar Parrikar, CM of Goa, all the state government offices, local-autonomous bodies, public sector undertakings, all educational institutions including aided institutions shall remain closed on March 18."