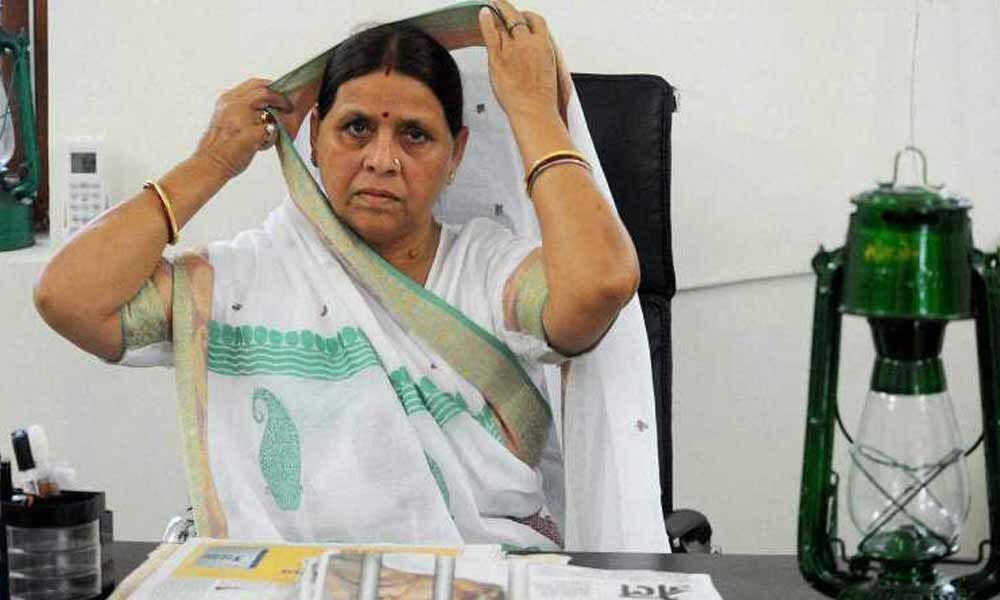 Tejaswi Yadav, meanwhile, said that Nitish Kumar should clarify whether he had asked Prashant Kishor to visit them.

PATNA: Rabri Devi on Saturday claimed that Nitish Kumar offered to make her son Tejaswi Yadav Bihar's Chief Minister in 2020 Assembly elections on a condition that Kumar be made Mahagathbandhan's prime ministerial candidate in the ongoing General elections.

The former Chief Minister said, "Nitish is not being valued by NDA, Prime Minister (Narendra) Modi and BJP. He is under BJP's pressure which is why he is coming back to us. Prashant Kishor came at least five times. Nitish Kumar had said that he wants to see Tejashwi as Chief Minister in 2020 if we (Mahagathbandhan) declare him the prime ministerial candidate".

Kishor, who hails from Bihar, worked with Kumar during the Bihar assembly election in 2015. He formally joined the Janata Dal (United) in 2018 and has been credited with devising successful political campaigns for Kumar.

Speaking about the grand alliance (Mahagathbandhan) forged to defeat the BJP in Lok Sabha elections, Rabri said: "Lalu ji is not here that is why I am saying 400 seats will come to Mahagathbandhan. Why Lalu ji is in jail? Why is he in jail? They did not find anything in Manju Verma case. He had no involvement in the fodder scam. He gave voice to poor people but despite being thankful to him, people blamed him for the scam."

Tejaswi, meanwhile, said that Kumar should clarify whether he had asked Kishor to visit them. He said: "Lalu's book 'Gopalganj to Raisina' has revealed the truth. Kishor is not active but he keeps coming on Twitter. Has he taken permission from Nitish ji? He should take his permission first."

On Kumar's 'willingness' to join Mahagathbandhan, Tejaswi added, "This is the truth and no one can deny it. Nitish ji should come forward and tell what had happened that made him make many attempts to rejoin the grand alliance within six months of reuniting with the National Democratic Alliance in 2017."

Earlier, former JD(U) leader Sharad Yadav, who is contesting Lok Sabha polls from Madhepura on RJD ticket also confirmed that Nitish Kumar had tried to patch up with the grand alliance.

The Lok Sabha polls for 40 parliamentary seats in Bihar began on April 11 and it is staggered in all seven phases till May 19. The results will be declared on May 23.