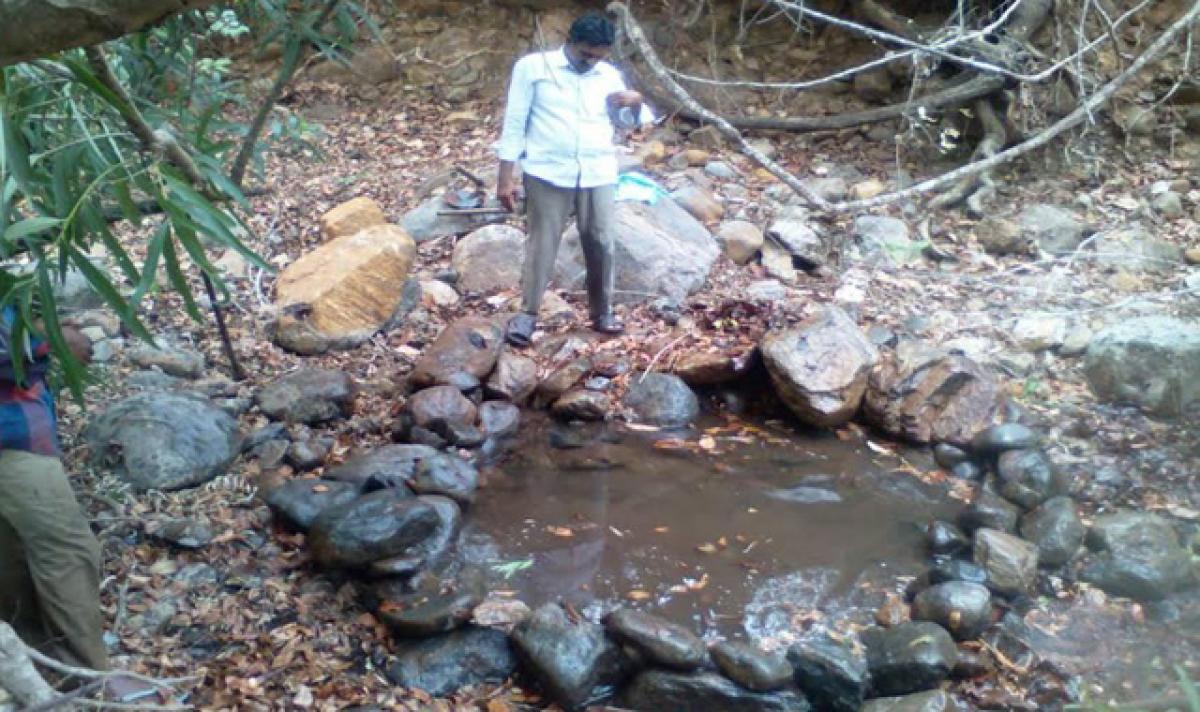 When the scorching sun with truant monsoons turns life for wild animals miserable in the Papikondalu National Park (PNP), waterholes created by the wildlife personnel along the streams provided the much-needed lifeline. The park is spread over 1,000 sq km in the forests spread over East and West Godavari districts.

Rajamahendravaram: When the scorching sun with truant monsoons turns life for wild animals miserable in the Papikondalu National Park (PNP), waterholes created by the wildlife personnel along the streams provided the much-needed lifeline. The park is spread over 1,000 sq km in the forests spread over East and West Godavari districts.

Faunas tend to stray out of their habitat in the reserve forests in summer to slake their thirst and face the risk of being poached by hunters. An Indian bison found its way into Rajamahendravaram city from the reserve forests sometime back and injured more than 10 persons. A senior police was forced to shoot it down in a desperate attempt to save the people. In an another instance, a leopard took shelter in a house for three days in the same city last year and it was finally let off in the forest area by the forest department authorities.

A team of personnel from the wildlife division of the forest department has embarked upon water harvesting methods by digging waterholes in the park area to save the wildlife this time. This facility was created along the three perennial streams that pass through the reserve forest such as Pamuleru, Jalatharu and Pedavagu.

“It is a time-tested method adopted by tribals in the forests to create water holes nearby streams and quench their thirst. We just took a leaf out of their book”, V Prabhakar Rao, Divisional Forest Officer (Wildlife), told The Hans India. The Godavari river, known as the perennial river, dried up with sand beds surfacing all over, so also the streams that feed the river.

The lack of rains in the catchment is the reason. This critical situation has necessitated waterholes. Even if the streams dried up, water springs up if a hole is created with a depth of just half a metre-1mtre in the river basin, the DFO added. The authorities created base camps with waterholes to come to the aid of animals. Besides,

The Forest department has also installed 150 trap cameras at different locations to help carry out animal census in the forest area. Images captured by cameras indicated the movement of species which are not yet spotted by the wildlife authorities.

According to information, species like stripe necked mongoose, honey badger striped hyena, four kinds of deer including Sambar are making a living in the forest as per the visuals provided by the cameras, Mouse, spotted deer and barking deer were identified as having made their habitats in the sanctuary.

Two tigers were spotted in the trap cameras, said the DFO. Besides, a large number of leopards, 18-foot long king cobra, bamboo-pit vipers, 92 kinds of boars, Indian bison and bears have been filmed.