Mangalagiri AIIMS to begin classes in 2018-19 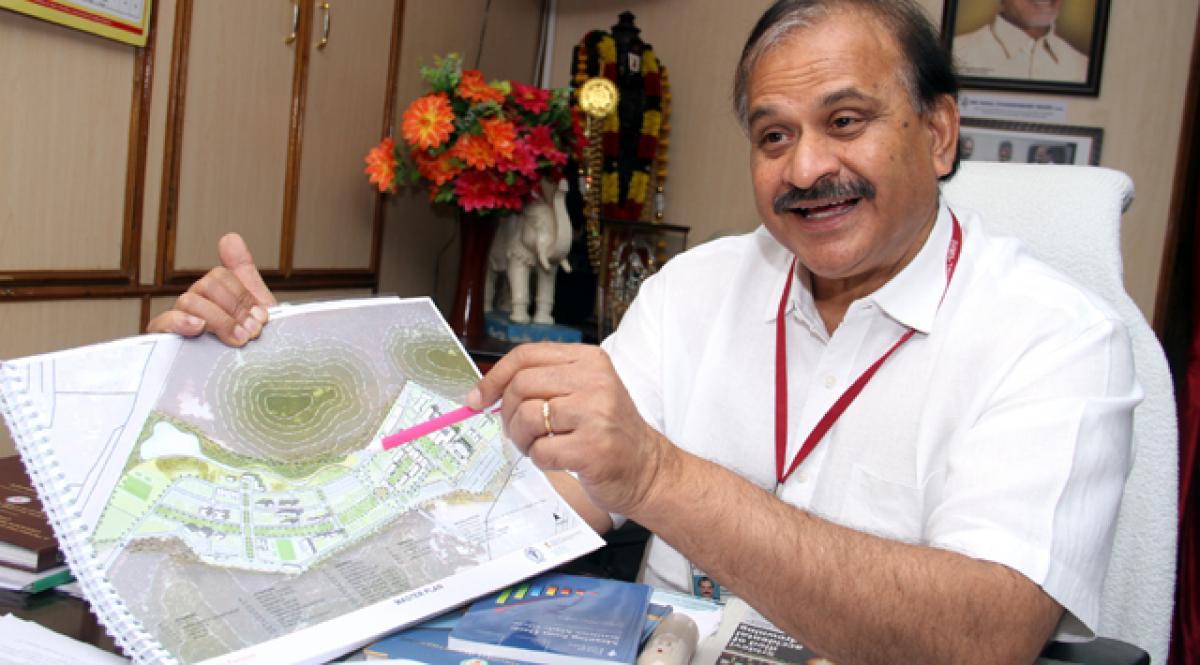 If everything goes well in expected lines, AIIMS, Mangalagiri, will be completed in four years only. Sri Venkateswara Institute of Medical Sciences (SVIMS) Director-cum-Vice Chancellor and mentor of AIIMS, Mangalagiri, Dr T S Ravi Kumar hoped that though the given period was five years, it may be well completed before that period.

Tirupati: If everything goes well in expected lines, AIIMS, Mangalagiri, will be completed in four years only. Sri Venkateswara Institute of Medical Sciences (SVIMS) Director-cum-Vice Chancellor and mentor of AIIMS, Mangalagiri, Dr T S Ravi Kumar hoped that though the given period was five years, it may be well completed before that period.

In an exclusive interview to The Hans India, he said that the Government of India will provide Rs 1,618 crore for the institute in a phased manner over five years. Already the first phase of works has been going on with the tenders were finalised almost six months ago.

The Central government had released Rs 272 crore under Pradhan Mantri Swasthya Suraksha Yojana (PMSSY), for phase-I works under which the out-patient block and residential blocks have been taken up, he said.

“The whole campus will come up like an academic quadrangle which was designed by International designers Perkins Eastman of New York and HSCC (Hospital Services Consultancy Corporation Limited), a public-sector unit of GOI, has been entrusted with the construction of campus. The State government has provided 192 acres of land near Mangalagiri for this green campus,” Dr Ravikumar maintained.

The first phase with about 1,000 beds will be completed by December and bidding process has been going on for Phase-II for which Rs 560 crore were earmarked.

The campus will have bicycle paths and motorised battery vehicles to provide pollution-free atmosphere with separate paths for patients, faculty and staff. AIIMS, Mangalagiri will also have a helipad for level-1 trauma centre, the Director revealed.

“The in-patient block was designed to give them a sense of good felling by having a mountain view from any side of building with two blocks will be built in double ‘S’ shape,” he averred.

Along with this, AIIMS two more campuses at Nagpur in Maharashtra and Kalyani in West Bengal were started. When asked about which campus among these three has been progressing well, he said, “The progress of this campus may be on par with Nagpur campus though the contractors were saying that our project was much ahead. I am sure, it was going on as per the target now.”

MBBS classes in Mangalagiri will be commenced from 2018-19 academic year and the first batch will have 50 students to be admitted through AIIMS entrance examination. The students’ strength will be gradually increased in coming years. To start the classes, temporary campus was getting ready at Siddartha Medial College in Vijayawada.

As existing classrooms and other facilities cannot be used for two institutions under MCI norms, a new facility being created in a cost-effective manner, said Dr Ravikumar. Accordingly, the State government had released Rs 6.5 crore for works at temporary campus which will have octagon-shaped buildings and to be completed by May.

“As the residential complexes at Mangalagiri will be completed by December, now, we are looking for apartment complexes in Vijayawada to house the students, faculty and staff,” he said.

So far, the Deputy Director was recruited for campus and he will work with mentor. The mentor institute, JIPMER, Pondicherry, has already taken up faculty recruitment process and soon interviews may be held in Chennai, he revealed.

“The Mangalagiri campus will have virtual classrooms with faculty from SVIMS, JIPMER and other institutes of repute can teach students from day one. I am very keen to introduce more academic innovations in the new campus,” said Dr Ravikumar.