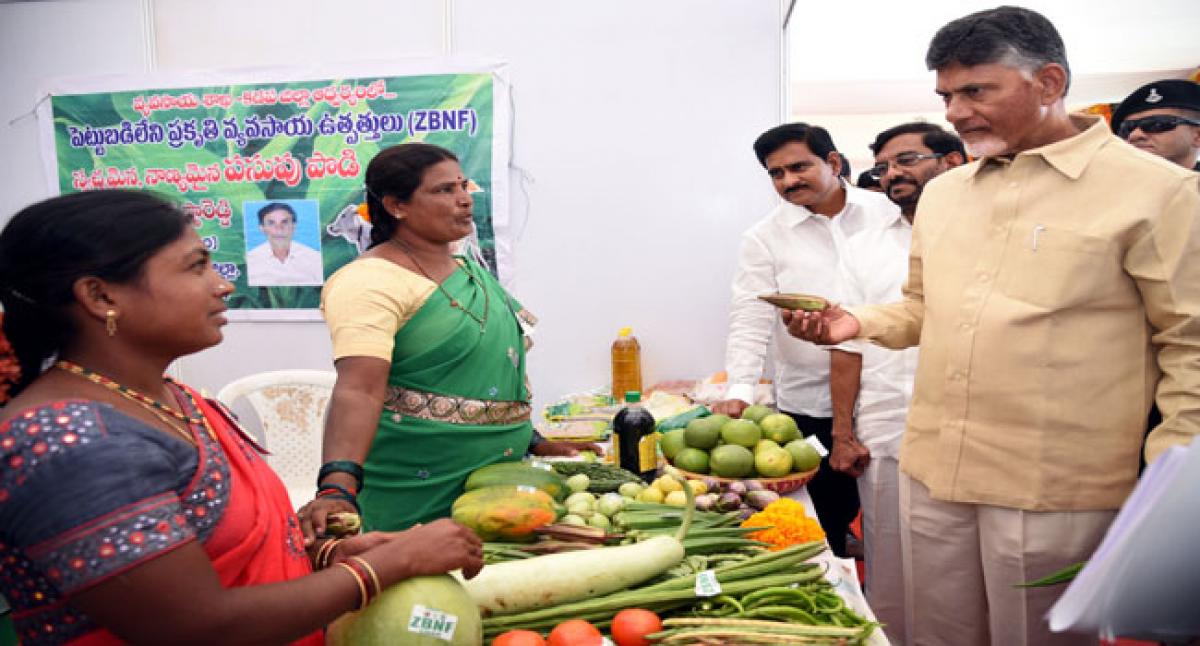 Overwhelmed with the massive response received to his speech in the United Nations recently on Zero Budget Natural Farming ZBNF, Chief Minister N Chandrababu Naidu on Thursday assured the farmers that the State government would extend all kinds of support to the environmentfriendly Zero Budget Natural Farming in the State and asked the latter to take it up on a massive scale

Vijayawada: Overwhelmed with the massive response received to his speech in the United Nations recently on Zero Budget Natural Farming (ZBNF), Chief Minister N Chandrababu Naidu on Thursday assured the farmers that the State government would extend all kinds of support to the environment-friendly Zero Budget Natural Farming in the State and asked the latter to take it up on a massive scale.

In a bid to encourage farmers in the State to take up ZBNF in a big way, Naidu announced that the State government would give a prize of Rs 100 crore if a farmer wins Nobel Prize by adopting ZBNF in the State.

He said many leaders in the world were impressed when he spoke about Zero Budget Natural Farming at the United Nations recently. "Some delegates from countries like Indonesia and Kenya inquired about the ZBNF and decided to come to Andhra Pradesh to know about ZBNF," he said.

Asking farmers to take up the responsibility of giving healthy food products to people, the Chief Minister pointed out that farmers who have adopted ZBNF would be worshipped as farmer Gods (Rytu Devullu) by people in the country.

Chandrababu Naidu interacted with farmers at Indira Gandhi Municipal Corporation stadium on Thursday. Department of Agriculture in coordination with the Revenue and other departments conducted the meeting with the farmers. Several thousand ZBNF farmers from different parts of the State attended the meeting.

Chandrababu Naidu said ZBNF was getting popular in the country after Andhra Pradesh started it in a big way. He said 5,000 community resource persons and several hundred officials including the State resource persons are working in the State to promote ZBNF, which he said is very good for health. ‘Many people are suffering from various ailments particularly due to consumption of food made of artificial and harmful fertilisers,’ he averred.

He said farmers practicing ZBNF are equal to doctors because they are giving good health to people by producing harmless food products. He said Subhash Palekar of Maharashtra has introduced the ZBNF and Andhra Pradesh government is giving full support to the peasants to implement the environmental-friendly system.

He said the ZBNF is cost effective and would enrich the soil because harmful chemicals are not used in the system. Chandrababu Naidu said the State government was taking measures so that at least 60 lakh farmers in the State take up ZBNF by the end of 2024.

Referring to the benefits of the ZBNF, he said the average life span would go up to 80 years from the present 70 years in the country if all people consume the healthy food products made of ZBNF. He said farmers got a good opportunity to repay to the mother earth by practicing the Zero Budget Natural Farming and conserving the soil.

Agriculture Minister Somireddy Chandramohan Reddy explained the objectives of the State government in promoting ZBNF. He said Chandrababu Naidu created history by delivering speech at the United Nations on ZBNF which is a rare opportunity.

He appealed to the farmers to shun using harmful fertilisers in cultivation and adopt eco-friendly ZBNF. Earlier, the Chief Minister interacted with three farmers and inquired about the benefits of Zero Budget Natural Farming and benefits they derived.