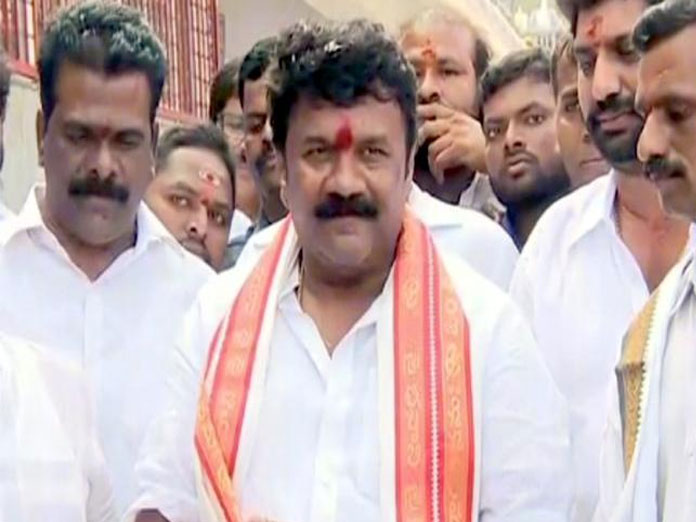 TRS leader and Sanathnagar MLA Talasani Srinivas Yadav visit Kanaka Durga Temple at Indrakeeladri in Vijayawada on Monday During Talasanis visit, a huge bike rally was organized with the supporters from Ibrahimatnam to Durgagudi in the city

Vijayawada: TRS leader and Sanathnagar MLA Talasani Srinivas Yadav visit Kanaka Durga Temple at Indrakeeladri in Vijayawada on Monday. During Talasani's visit, a huge bike rally was organized with the supporters from Ibrahimatnam to Durgagudi in the city.

Speaking on the occasion Talasani said that Chandrababu Naidu's government is not performing well in the state. The people in AP wants welfare and development. By constructing Hi-tech city building Naidu claims that he has constructed the entire Hyderabad city, Talasani criticized.

He said that we are expecting the Federal Front without BJP and Congress. After TRS Victory in Telangana Assembly elections, Chief Minister KCR promised a return gift to Chandrababu Naidu. If Naidu can come to Hyderabad and work, why can't we go work there, KCR questioned.

With the intention of working in National politics, TRS leaders will come to Andhra and work. He received many calls from the Andhra people asking him to involve in-state politics. Very soon Chandrababu Naidu will see their return gift effect, Talasani said.

Vijayawada deputy Mayor Satyanarayana Yadav and members of Yadav community greeted Talasani on his arrival. After completing the darshan he will travel to Bhimavaram were he will visit Mavullamma temple.