Target set for disbursal of one lakh Mudra loans 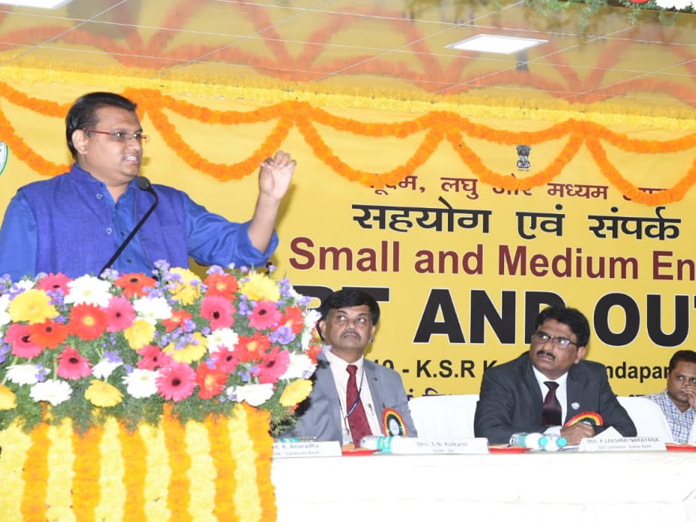 District Collector PS Pradyumna has set a target of making one lakh entrepreneurs in Chittoor district within next one monthThe bankers have disbursed Micro Small and Medium Enterprise MSME loans to 54,000 people this fiscal, which was 10,000 more than last years 44,000

Tirupati: District Collector PS Pradyumna has set a target of making one lakh entrepreneurs in Chittoor district within next one month. The bankers have disbursed Micro Small and Medium Enterprise (MSME) loans to 54,000 people this fiscal, which was 10,000 more than last year’s 44,000.

By providing loans to one lakh people under the Pradhan Mantri Mudra Yojana (PMMY), Chittoor district should become the only district in the country to achieve that feat. He further stated that Rs 258 crore were distributed in Chittoor district followed by East Godavari with Rs 158 crore.

Addressing at the MSME support and outreach programme organised by Indian Bank Zonal office in coordination with District level Bankers Committee in Tirupati on Wednesday, he said 22,381 Jan Dhan Yojana accounts have been opened in the district.

Already, the district stands on top in the country in disbursement of loans barring a few metros under the Stand Up India, he mentioned. The Collector said entrepreneurs can create more employment opportunities through the MSME loans and added that this sector already created 80 per cent of employment. He said per capita income of the district which was Rs 1.35 lakh now should go up to Rs 3.89 lakh in the next five years.

For this, Pradyumna advised the bankers to go in a systematic way of reaching the beneficiaries periodically and get control over them by meeting their requirements. He suggested that skill development should be part of unit cost and skill has to be continuously improved.

The General Manager of District Industries Centre B Anil Kumar Reddy said that both the Central and State governments have laid more emphasis on MSME sector and designing several investment friendly policies.

The Prime Minister has launched MSME 100 days outreach programme on November 2 under which major programmes were planned and MUDRA loans was important among them which the bankers have been doing exceptionally well. In the district, focus was on weavers as textiles is the core sector under outreach programme.

The General Manager of MSME, Indian Bank K Chandra Reddy pointed out that agriculture GDP has been coming down while GDP in MSME was increasing which underlines the need of focussing on this sector.