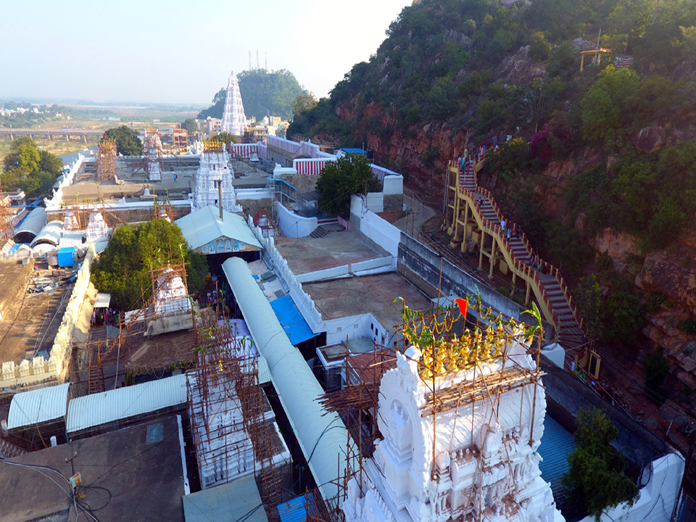 Tirupati: The implementation of Srikalahasti temple master plan seems to have eclipsed by Land Acquisition (LA) due to which it has been going at a snail’s pace. Though it was planned to complete all the works before 2018 Sivaratri celebrations, in reality, it may not be completed before 2020 as the land acquisition could not be completed even now with 11 cases were still pending. The technical expert committee of the Endowments department has visited the temple a couple of days back to take stock of the situation over the delay in land acquisition.

The government has sanctioned Rs 94.18 crore towards compensation to 199 persons for their properties, which were identified for acquisition to implement master plan. After several rounds of parleys, it was decided to pay Rs 38,400 for one square yard and the total area to be acquired is 3.9 acres. About 188 persons have submitted their applications to temple authorities to receive payments and got them.

But, the remaining 11 cases are pending of which seven cases were with the High Court while the remaining four were in local court with family disputes. To clear the cases at local court, the temple authorities have filed an affidavit that they will deposit the compensation amount before court, said the temple Executive Officer S Ramaswamy. He told The Hans

India that once court gives direction in this regard, they will complete the formalities. Regarding the remaining seven cases, the High Court has directed the temple authorities to take the properties under the LA Act. “We have informed this to concerned parties, who sought some time to convey their response. If they do not agree and come forward to take the compensation, we will initiate further steps to acquire the properties under LA Act,” EO maintained.

In this backdrop, the delay in executing the master plan becomes inevitable, as the process of LA involves certain procedures and cannot completed quickly. The temple has been drawing huge crowds every year and the Rahu Kethu pujas being performed in the temple became famous across the country.

Apart from common people, celebrities like film actors, sports personalities, politicians and others have been visiting the temple to perform these pujas. The temple fetched a revenue of Rs 146 crore in 2017-18 fiscal, which was the highest among all other temples in the State, barring Lord Venkateswara’s temple in Tirumala. In view of this, the need to provide more amenities to the pilgrims to make their pilgrimage a hassle free one, it was proposed to implement master plan around the temple area to create more amenities keeping in view the growth in the number of devotees during next 50 years.

The architectural plan for the proposed works was ready and approved by the authorities. Once the court cases are settled, the execution of master plan will begin starting with the queue lines for the convenience of devotees, toilets, luggage counters etc., Beautification of surrounding areas, road widening, developing parking places and other works will follow.

Entry plaza and waiting complex for Rahu Kethu puja devotees will be taken up in the second phase. Swarnamukhi river front development is another important feature of the master plan. The technical committee of Endowments department had held discussions with the temple authorities on which works can be taken up immediately in the land already they have acquired.