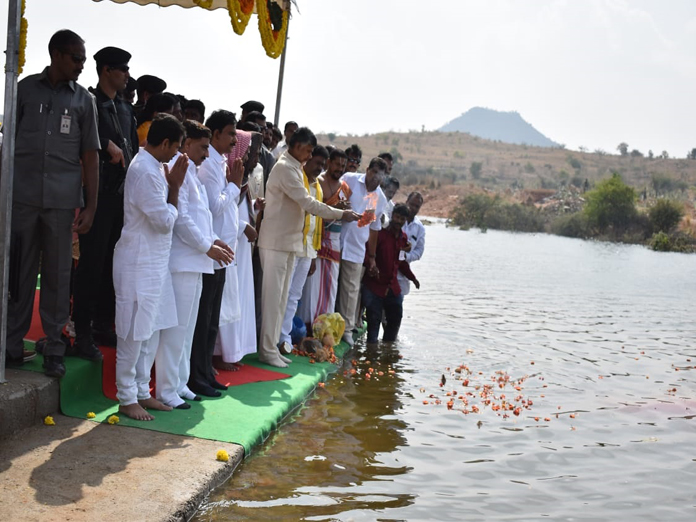 Chief Minister N Chandrababu Naidu has made an impassionate plea to the people, who benefited immensely by a host of welfare and developmental schemes being implemented in an unprecedented scale to vote positively for the Telugu Desam Party in the forthcoming elections

Cherlopalle (Anantapur): Chief Minister N Chandrababu Naidu has made an impassionate plea to the people, who benefited immensely by a host of welfare and developmental schemes being implemented in an unprecedented scale to vote positively for the Telugu Desam Party in the forthcoming elections.

Addressing a public meeting after releasing water from the Punganur reservoir to Chittoor and offering Jala Harati here on Tuesday, Naidu said that the TDP should win all the seats it contested. Elaborating on the schemes that are reaching the people on an unprecedented scale, the Chief Minister observed that if the people thought he had really done something for them, the TDP must be given a landslide victory.

He cautioned the people against being misled by forces inimical to the interests of the State in an indirect reference to BJP and YSRCP and voting for another party that has no governing experience nor any love for the State. Substantiating his charges against the YSRCP, Naidu said that the party is in league with BJP and KCR, who are working totally against AP State.

If by an accident the YSRCP comes to power everything will turn turtle. All the development would be reversed, and the State would plunge into backwardness and chaos. He even warned that if a fractured verdict is given, then he would have to engage in politics to save his own government and there will be little that one can do amidst instability, he asserted.

He even appealed to people and party workers to accept the candidates he nominated for their respective constituencies and vote for them. “If you vote for the candidates, who I nominate then I will do anything you ask for,” he assured.

Naidu took a dig at YS Jaganmohan Reddy for joining the Federal Front of K Chandrashekar Rao, who is working against State interests. He said that there are only two fronts in the country, one for and another against BJP. Describing the coming elections as crucial, he asked leaders, party workers to keep state interests above their own and apply their energies on defeating BJP and YSRCP.

Chandrababu stated that he has brought 175 tmcft of water to Anantapur and filled all the reservoirs and village tanks except Peruru and BTP projects which are under execution. He said no State in the country can compare with the development and welfare schemes implemented in AP.

He mentioned that several parties spoke of interlinking of rivers but TDP government is actually doing it and had already linked Krishna-Godavari. Similarly, Vamsadhara and Nagavali will be linked with Godavari and also Penna river in Nellore to Krishna. He said that 64 per cent of Polavaram project has been completed and by end of 2019, water through gravity will be supplied to farmers.

Later, the Chief Minister distributed economic assets to the weaker sections and the BCs. Local MLA Chand Basha presided over the meeting. All the district MLAs, Ministers Sunitha and Kalava Srinivasulu and people’s representatives participated. Naidu took a helicopter to Puttaparthi to catch a special flight to Gannavaram.