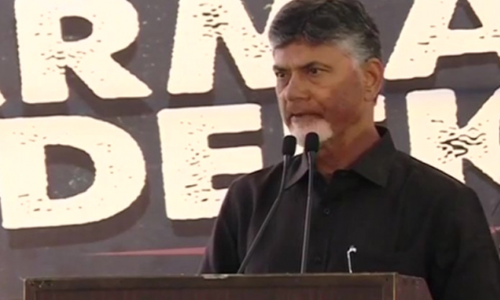 In a blistering attack on Prime Minister Narendra Modi, Chief Minister N Chandrababu Naidu warned that he will teach a befitting lesson if he will not sanction Special Category Status to AP within three days

Amaravati:In a blistering attack on Prime Minister Narendra Modi, Chief Minister N Chandrababu Naidu warned that he will teach a befitting lesson if he will not sanction Special Category Status to AP within three days.

Putting two days deadline, Naidu said that Parliament will conclude within three days hence the central government has to fulfil all the promises given to AP, during one day Dharma Porata Deekhsa.

“I warn you (Modi). You promised to give Special Category Status, hence we entered into alliance in 2014. You promised during election campaigns and even at Amaravati foundation. You have made other promises, but conveniently ignored all the promises after electing as Prime Minister. Yesterday you visited Guntur to attack me but not solve even a single promise.”

“Personal attack on me by Modi is unwarranted. I am reminding you that you must fulfill all the promises given by you to state. Otherwise we know how to get them. It is our self respect. I warn Modi to stop attacking personally. You have two days only.”, Chandrababu Naidu said.

They denied the permission for protest outside the Delhi, hence we are protesting here.

“When the rulers show discrimination on a state or caste, then there is a need to fight. Today we came here all the way to protest against Central government. The Rulers have to keep the Dharma in mind. Modi missed it. He did not fulfil AP Reorganization Act”.

“We did not have economic capital in the state after bifurcation, hence the central government announced the Special Category Status. But, the Modi government did not give.”

“Present Finance Minister and Vice President of India had demanded the Special Category Status for ten years in Rajya Sabha when they were in opposition at the time of passing the bill.”

There are 18 commitments by the central government in the Act. One of them is to provide financial support to the AP under Revenue Deficit grant to a tune of Rs 16,000 crore but gave only Rs 3,900 crore and remaining did not give.

The backward districts grants are also not released by the central government. They have taken back Rs 350 crore after giving to AP, which is nothing but misbehaviour, unjustifiable, highhandedness of Modi. They don’t have right.

Capital city, we need Rs 5 lakh crore to make a city like Hyderabad. They promised to sanction Rs 3500 crore but released only Rs 1500. They did not extend the Assembly seats, a miserable failure.

Imbalance of development led to unrest among public in AP, he added.

We came here to express our solidarity to MPs who have been fighting in Parliament, he said.