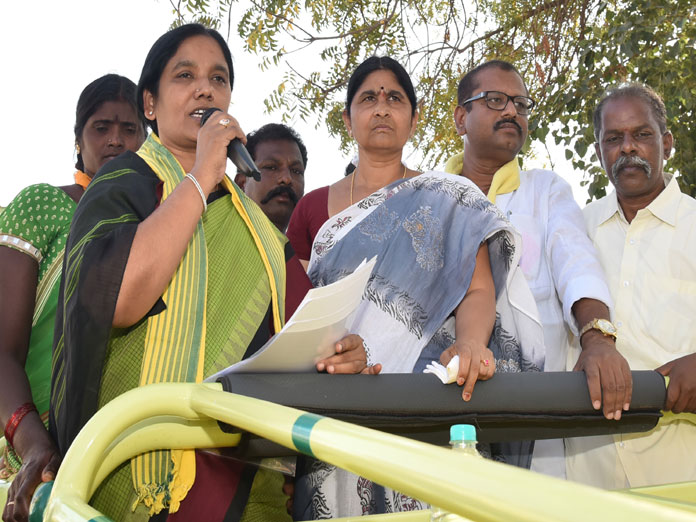 Kandukur (Anantapur): Women and Child Welfare Minister Paritala Sunitha said that she would identify backward villages in her constituency and develop them as model villages.

Participating in the inauguration of several development works executed in her constituency worth Rs 23 crore here on Friday, she described TD government as a people's welfare government. Earlier, the Minister also laid foundation for a road laying project from Sri Krishnadevaraya University (SKU) to Kandukur village at a cost of Rs 15 crore.

Despite the severe financial crunch being faced by a deficit budget, Chief Minister N Chandrababu Naidu had not compromised on people’s welfare. She stated Chandrababu was paying unemployment doles to the youth and training them in life and professional skills. The trained youth are finding employment avenues, she added.

The Minister said that the HNSS Project has helped in filling of all village tanks and recharging borewells. Thus, boosting groundwater tables. When people with major health problems are approaching the government for medical help, the CM Relief Fund is coming to their rescue, Sunitha said and mentioned that from womb to tomb at all stages in life every family member is benefiting from at least one scheme out of the host of welfare schemes being implemented.

For every ration card holder, only one member in a family can receive pension benefit but if one is physically handicapped his or her application for pension can be considered, Sunitha said. Those not having a ration card or pensions can apply afresh. The government is committed to improve quality life of people.

She gave a call to beneficiaries to take advantage of the Chandranna Bima scheme by paying jus Rs 15 as an insurance premium. Later, Paritala Sunitha inaugurated a cement concrete road at Krishnamareddipalle laid at a cost of Rs 36 lakh and a water scheme benefitting three villages.