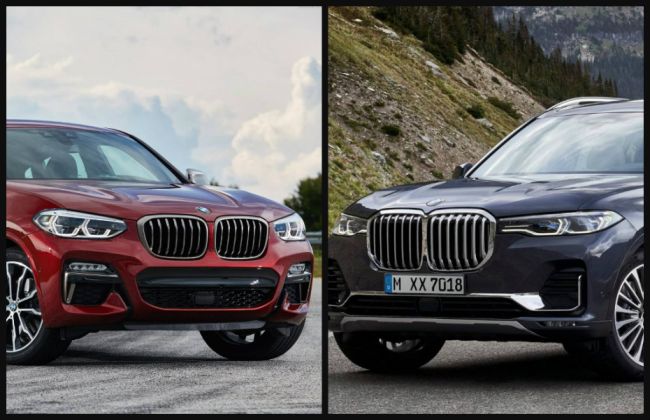 In a recent release from BMW about its positive performance in 2018 having sold over 10k cars, the German car manufacturer has also revealed that the...

In a recent release from BMW about its positive performance in 2018 (having sold over 10k cars), the German car manufacturer has also revealed that the upcoming X7 and X4 models will be locally built in India at its Chennai facility. Both of these SUVs are scheduled to launch in 2019.

The X7 is a completely new model in BMW’s SUV range. The flagship BMW SUV is the biggest and most luxurious one till date and was globally unveiled in October 2018. It is expected to launch in India in early 2019 and is already listed on its website. Meanwhile, the X4 sits between the X3 and X5, and can be considered a coupe-esque version of the X3 SUV. It was also spotted in India in late 2018. This model, however, is expected to be launched in India in mid-2019. The BMW X7 and X4 will be locally built alongside other SUVs sold in India, like the X1, the X3 and the X5, at its Chennai facility.

Once launched, the BMW X7 luxury 7-seat SUV will compete with the likes of the Mercedes-Benz GLS, Audi Q7 and Land Rover Discovery. The Merc and Audi 7-seat SUVs are due for updates soon as well. The X7 is expected to be launched first in the top-spec M50d variant with an estimated price of over Rs 1 crore. The BMW X4, on the other hand, will face off against the Mercedes GLC Coupe with an expected price tag of over Rs 50 lakh.