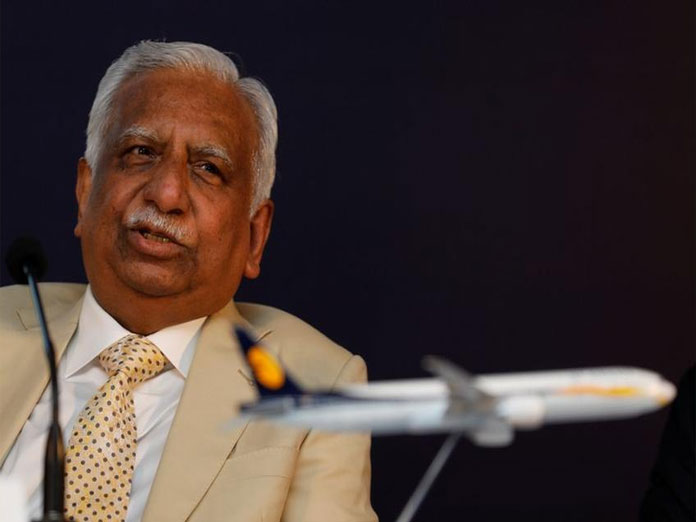 Jet Airways founder Naresh Goyal has agreed to step down as chairman of the airlines board, two sources with direct knowledge of the matter told Reuters on Thursday, as the cashstrapped Indian carrier struggles to finalize a rescue deal

Shares of Jet rose as much as 7 per cent in early trade on Friday.

​New Delhi: Jet Airways’ founder Naresh Goyal has agreed to step down as chairman of the airline’s board, two sources with direct knowledge of the matter told Reuters on Thursday, as the cash-strapped Indian carrier struggles to finalize a rescue deal.

Goyal, who founded the full-service carrier 25 years ago, has also agreed to reduce his 51 percent stake in the airline but would continue to be a part of the company in some capacity even after stepping down as chairman, one of the sources said.

Shares of Jet rose as much as 7 per cent in early trade on Friday.

Jet has been in talks with shareholder Etihad and Indian conglomerate Tata Sons for fresh funds or a stake sale, but sources have told Reuters that any deal would require Goyal to step down, or take a less prominent role.

The rising dominance of low-cost carriers like IndiGo in a price sensitive market as well as high oil prices, hefty fuel taxes and a weak rupee have left Jet strapped for cash.

Saddled with a billion dollars in debt, Jet Airways is struggling to make payments to its pilots, vendors and lessors, some of whom have forced the airline to ground over a dozen planes prior to potentially moving them out of India.

The airline was also forced to ground another six planes on Thursday due to non-payment of dues to lessors, Jet said in a statement, taking the total tally to 19 which is about 15 per cent of its fleet. It has a fleet of about 123 mainly Boeing Co planes, including 16-owned aircraft.

The troubles at Jet have rekindled memories of Kingfisher Airlines’ collapse in 2012 that forced lessors to write off millions of dollars. Jet’s lessors are growing increasingly skeptical about the carrier’s ability to pay its dues, sources have told Reuters.

Jet did not respond to emails seeking comment but said last week that its board had approved a rescue deal which will make its lenders, led by State Bank of India (SBI), its largest shareholders.

The deal, which is subject to regulatory approvals, includes an equity infusion, debt restructuring and the sale or sale and lease back of aircraft.

SBI subsequently held a meeting with Jet Airways and its 24 per cent shareholder Etihad but no consensus was reached on some of the aspects of the bailout deal, one of the sources said.

STICKING POINT
Etihad is reluctant to put more money into the airline including interim funds of about 7 billion rupees (USD 99 million), one of the sources said.

The Abu Dhabi carrier, however, is still in discussions to raise its stake in Jet but will not shoulder any management responsibility, said a third source aware of the matter.

“Management of the airline is a hot sticking point that needs to be sorted out,” said the source, indicating that Etihad’s patience appeared to be wearing thin.

Etihad saved the Indian airline the last time it was in trouble in 2013, spending USD 600 million for a stake in the carrier, three take-off and landing slots at London Heathrow and a majority share in Jet’s frequent flyer program.

Jet’s shares plunged 67 per cent in 2018, wiping out USD 1 billion from its value and making it the second-worst performer among airline stocks globally.