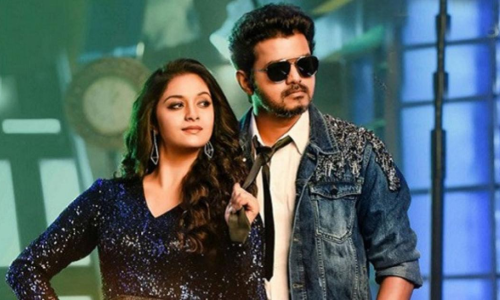 Vijay Sarkar Movie Review and Rating The successful combination of AR Murugadoss and Vijay has never gone wrong Both their films, Thupakki and Kaththi turned out be box office spinners Now, the combo is going to repeat again with the muchawaited film Sarkar

The successful combination of AR Murugadoss and Vijay has never gone wrong. Both their films, 'Thupakki' and 'Kaththi' turned out be box office spinners. Now, the combo is going to repeat again with the much-awaited film 'Sarkar'.

The film has been carrying a decent pre-release buzz among the audience. Touted to be a political drama, Keerthy Suresh and Varalaxmi Sarathkumar played the female leads in the movie. After dodging some controversies including plagiarism issues and postponing the release date, the film has finally hit the screens today on November 6th. Let's check out the review of the movie.

Sundar (Vijay) is the CEO of the world’s leading company GL. People call him a corporate monster as he has the powers to make or break companies across the globe. During the elections, Sundar comes to Chennai to cast his vote. There he comes to know that his fundamental right was given to an unknown stranger.
Shocked by this, Sundar approaches the court and uses the unfamiliar 49 (P) section to recast his vote. He also inspires lakhs of people who lost their voting rights. This causes the re-elections in Tamil Nadu. But this time, Sundar gets off his CEO chair and join politics. He competes against the biggest political party headed by Pala.Karuppaiah and Radha Ravi. The youngsters and social activists start supporting Sundar. Can Sundar become successful?

Vijay is undoubtedly one of the finest actors and he has given his best performance in the film. His fights, dance, dialogue delivery are topnotch. The film is all about him and it would be an eye feast for his fans. His character evolves from being a businessman to a politician and Vijay justified his role really well. Keerthy Suresh looked beautiful in the film. She maintained good chemistry with Vijay. Her cute expressions and dialogue delivery are superb.
Varalaxmi Sarathkumar grabs all the attention with her terrific performance. Her promising performance will definitely strike the chord with the audience. Yogi Babu's comedy makes the audience laugh. His light-weighted comedy eases the intense storyline. Radha Ravi's performance is worth appreciating.

The story is very engaging. There is not even a single scene in the film which is boring. AR Murugadoss is a pro in handling the complex stories and he proved the same point again with this film. The production values by Kalanithi Maran under Sun Pictures are excellent. Music by AR Rahman is just average. But his BGM is terrific.
The background score elevated the heroism of Vijay really well. Cinematography by Girish Gangadharan is wonderful. He produced some impressive visuals and is one of the major highlights. Editing by Sreekar Prasad is good. The editing is clean and neat. There are no draggy scenes in the film. The runtime is crisp. The Telugu dialogues are also good.

The movie runs with the concept of reclaiming the votes. But the commercial elements in the film makes this movie a complete entertainer. The action sequences are the highlight. Vijay's entry scene is awesome. The first half is not so boring and just average.

The sentiment scenes could have been better. The second half of the film has much to tell than the first half. 'Sarkar' would greatly impress Vijay fans. It seems like the movie has been designed as a complete political drama to showcase Vijay’s real-life political ambitions. Watch with limited expectations to enjoy the film.