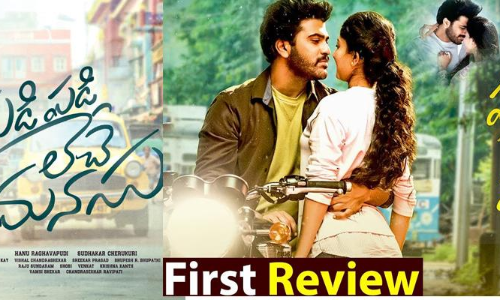 Padi Padi Leche Manasu Review and Rating Young hero Sharwanand and gorgeous actress Sai Pallavi joined hands for a love story titled as Padi Padi Leche Manasu Touted to be a breezy romantic entertainer, Hanu Raghavapudi helmed this project The film has been carrying a decent buzz among the audience The trailer of the film has already received a positive response The director has pinned all his

Young hero Sharwanand and gorgeous actress Sai Pallavi joined hands for a love story titled as 'Padi Padi Leche Manasu'. Touted to be a breezy romantic entertainer, Hanu Raghavapudi helmed this project. The film has been carrying a decent buzz among the audience. The trailer of the film has already received a positive response. The director has pinned all his hopes on this movie bankrolled by Sudhakar Cherukuri under SLV Cinemas banner. The film got released today on December 21st, 2018. Let's check out the review of the film.

Surya (Sharwanand) is a football player in Kolkata. He falls for Vaishali (Sai Pallavi) who is a doctor. When Vaishali wants to marry Surya, he announces his breakup. What happened to their relationship after that? Why did Surya announce his breakup? What happens after that? Forms the story of the movie.

Sharwanand is undoubtedly the star of the film. He carried the movie on his arms. He performed really well. Sai Pallavi looked stunning in the film. She delivered a mesmerizing performance. She will not only impress the audience with her beauty but also her beautiful performance. The chemistry between Sharwanand and Sai Pallavi is delightful. The colorful chemistry between them can be considered as the biggest highlights of the film. Murali Sharma and Suhasini did their level best in essaying their roles. Priya Raman justified her role really well. Sunil and Vennela Kishore will definitely evoke good laughs in the theatres. Priyadarshi had a good screen presence. The rest of the cost also made their presence felt.

Hanu Raghavapudi has a unique has a different style in making love stories. He has already proved the same with 'Andala Rakshasi' movie and he did it again with 'Padi Padi Leche Manasu'. His brisk narration and beautiful execution of script will definitely strike the chord with the audience. The production values of SLV Cinemas are lavish. Cinematographer Jay Kay did an amazing job. The visuals came out really well. The beautiful backdrop of Kolkata helped the visuals even more. Music by Vishal Chandrashekhar is too good. He not only gave some energetic songs but also scored a pleasant and terrific background score. The editing by Sreekar Prasad is clean.

The movie has a simple without having any big complications. The first half starts on an entertaining note. The chemistry between the leads is undoubtedly the highlight of the film. The songs also came out well. The pace of narration slows down after 1 hour of the film. The pre-interval scenes are boring and the conflict point which has to play a key role in love stories is not that appealing. It appears to be silly which is the major setback of the film. The second half started on an emotional note and there are some so many boring and unnecessary scenes in the second half which will test the patience of the film. However, the incredible chemistry between the leads and the light-hearted comedy are the major the plus points of the film. Overall, 'Padi Padi Leche Manasu' is an impressive romantic entertainer with some shortcomings.