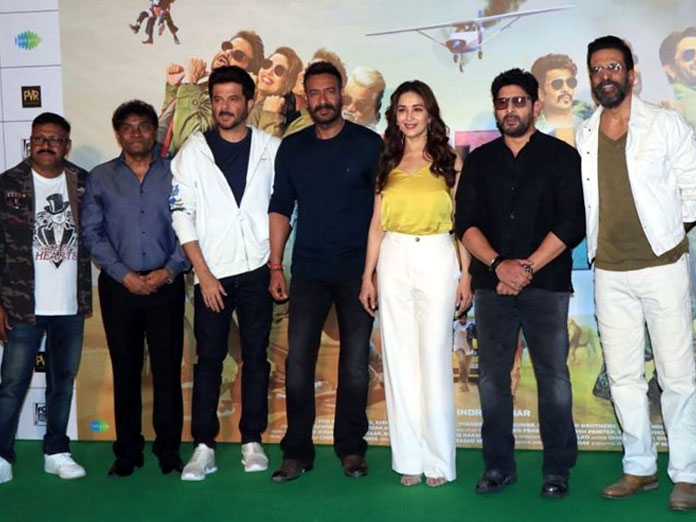 Actress Madhuri Dixit, who next will be seen in Total Dhamaal opposite Anil Kapoor has said that working in an adventurecomedy film, has been a mad journey for her

Actress Madhuri Dixit, who next will be seen in ‘Total Dhamaal’ opposite Anil Kapoor has said that working in an adventure-comedy film, has been a mad journey for her.

Madhuri Dixit was interacting with the media at the trailer launch of ‘Total Dhamaal’ along with film’s director Indra Kumar and her co-actors Ajay Devgn, Anil Kapoor, Arshad Warsi, Javed Jaffery, Johny Lever and Pitobash Tripathi on Monday in Mumbai.

Madhuri Dixit has earlier worked with Anil Kapoor in successful films like ‘Beta’, ‘Parinda’, ‘Pukar’, ‘Tezaab’ and ‘Ram Lakhan’ and now after many years, both of them have been paired opposite each other in ‘Total Dhamaal’, when asked Madhuri whether she observed any change in Anil Kapoor while working in the film, she said, “I don’t think Anil can ever change. He will always be the same. He is one of a kind. It’s always a pleasure working with him.”

Madhuri added, “This film saw me teaming up with my ‘Dil’, ‘Beta’, ‘Raja’ director-producer pair Indra Kumar and Ashok Thakeria. I am also working with Ajay Devgn after a long time. We did our last film together called ‘Yeh Raaste Hai Pyaar Ke’ and with Anil Kapoor, I am working after ‘Pukar’ so it was wonderful. Even, I am working with Javed Jaffrey after ‘100 Days’.”

Madhuri said that she enjoyed working in ‘Total Dhamaal’, she said, “I think the amount I have laughed in between shots with all these people around me, I think if the audience will laugh half the amount, I think this film is a success then because it’s been a mad journey for me and I thoroughly enjoyed it.”

When asked Madhuri what made her to say yes to ‘Total Dhamaal’, she said, “First of all, this film was directed by Indra Kumar ji and I had not worked with him for very long time. Then, I am paired with Anil Kapoor in the movie and Ashok Thackeria is one of the producers of the film and of course, the star-cast of the film is brilliant. There is Ajay Devgn and there is everyone in the movie. I heard the script and I think everything was based on the script. As soon as, I heard it, I couldn’t say no to it because this movie is so funny and it gave me something different to do after a long time therefore, I did it.”

Madhuri Dixit has turned producer with her upcoming Marathi comedy film ‘15th August’, when asked when her film is going to release, she said, “15th August will be released on Netflix. We are looking at April to release that film.”

When asked Madhri whether she would continue to produce film is future, she said, “Yes absolutely.. I would like to produce movies in future as well.”

‘Total Dhamaal’ is an adventure comedy film directed and co-produced by Indra Kumar. It is the sequel to the 2011 film Double Dhamaal and the third installment of the Dhamaal film series.

The film is scheduled to be released on 22nd February 2019.