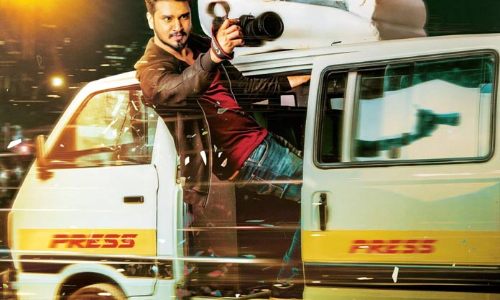 Young hero Nikhil who is known for his concept-oriented movies is now going to enthrall the audience with his upcoming movie 'Arjun Suravaram'.

Initially titled as 'Mudra', the makers have recently changed the title to 'Arjun Suravaram'. Nikhil is going to play the role of an investigative journalist in the film which is going to be official Telugu remake of Tamil hit film 'Kanithan'. Lavanya Tripathi is playing the female lead in this movie. The makers have today unveiled the teaser of the film on the occasion of Shivaratri. The 1-minute video showcases an intriguing investigation by Nikhil and his team. Some cute moments between Lavanya and Nikhil are also seen.

Santosh TN is helming this project whereas Rajkumar Akella is pooling resources for the movie. Sam CS is scoring music for the film. The official release date of the movie is March 29, 2019.