The pleasure of writing 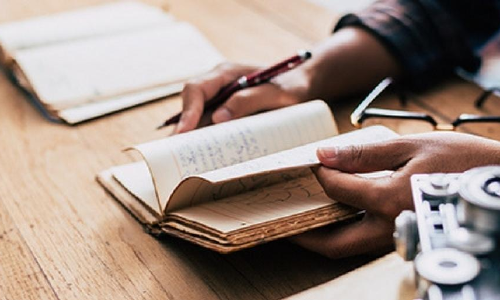 It was late in the evening in the dusty town of Bellampally where my parents live. Inwhat is a narrow and crowded colony, my father was busy chatting with more than a dozen of his friends and neighbours, when the office boy of the college for which my father was the principal, brought a postal cover.

Listen to this Article:

It was late in the evening in the dusty town of Bellampally where my parents live. Inwhat is a narrow and crowded colony, my father was busy chatting with more than a dozen of his friends and neighbours, when the office boy of the college for which my father was the principal, brought a postal cover.

As it bore my name as the sender, my father opened it anxiously. Lo presto!It contained a printed newspaper. Apparently, he could not makeout why I had to post a newspaper to him. But, the written letter inside stated that it carried the first published article of my journalistic career.

My father's happiness knew no bounds. There was a power cut. Having found it difficult to suppress his curiosity,and carrying a torch-light, my elated father read out the article to the gathering. Each listened in rapt attention.

Shortly thereafter, I received a reply, which spoke of the pride and happiness my father felt while reading my first published piece.

Quite ironically, it was on dowry system. I still remember the headline of the article that was published in 1983-‘Initiative should come from males’.

Just imagine my surprise when my classmates, particularly girls, wanted to know ifI would practice what I had ‘preached’. While on the topic, let me reassure you that I did not take any dowry.

Coming back to my engagement with writing, since then, I have written countless articles and have to my credit in excess of four thousand by-lines in the country’s leading newspapers and magazines.

However, the charm of the first by-line that dates back to 1983 remains romantically vivid in my memory.

It marks one of the high points of my writing journey.

Even today, every timeIwrite, I feel enlivened, enthralled and get spurred on for more challenges.

Believe me, I find it difficult to sleep on days thatI fail to writeat leasta few sentences. Writing has become an inseparablepart of my life not just my career.

Writing makes you immortal. When I interviewed Dr C Narayana Reddy, the legendary lyricist more than two decades ago, one sentence really struck me – “RastuRastuPotanu Sira Inkevaraku” (I shall continue to write till the ink dries up). The magical surmising retains its hold even today.

As the American poet, Maya Angelou elaborated, “There is no greater agony than bearing an untold story inside you.”

Writing gives you an opportunity not only to express yourself but to know a world hitherto unknown to you.It expands one’s knowledge horizons and broadens the frontiers of understandingbecause your acquaintances will get multiplied as more and more people read you.

Let me state that you need not be a journalist or anexpert to write. Even research studies reveal that writingstrengthensthe immune system and sharpens the intellectual faculties.

New research suggests that expressivewriting may also offer relief for those plagued by life-threatening or terminal diseases.

James Pennebaker of University of Texas, Austin and Joshua Smyth of Syracuse University suggest that writing about emotions and stress can boost immune functioning in patients with asthma and arthritis.
Last night, I was speaking to my brother's son, Koushik Prudvi, a medical studentin a US University.

He says he has written few hundred pages of his experiences in medical school and hospital, especially his personal encounters with patients.

He says that at times he was terribly tired and evendisturbed– tired due to the academic load and disturbed to see the trauma of the patients.

Infact, writingdown his feelings could not only relieve him of the stress and trauma but the written pieces made for aninteresting reading for medical students and aspirants.

Irrespective of the profession that you are in, take some time to relive the day’s chores by jotting down your feelings and experiences, once you are through with the day's excruciating drudgery. Who knows, these anecdotes when writtencan make you a celebrated writer.

At least, you are assured of mindfulness.(Mindfulness refers to a mental state achieved by focusing one's awareness on the present moment, while calmly acknowledging and accepting one's feelings, thoughts and bodily sensations).

However, everyone is not going to benefit similarly from writing. It all depends on how well you use writingto express yourself.

Joshua Smyth, in an intensive research review published in the Journal of Consulting and ClinicalPsychology (Vol. 66, No. 1), suggests that the key to effective writing is in the way people interpret and present their individual experiences. To tap writing's healing power, people must use it to better understand and learn from their emotions.

The mere act of writing need not necessarily be beneficial, argue sceptics. But, use writing as a tool to probe yourself, probe the world, unravel your feelings and have a debate with yourself in a cool and calmframe of mind.

As the new age American author, Shakti Gawain says “The more light you allow within you, the brighter the world you live in will be.”

Regular recording of your thoughts, feelings and experiences will help you gain an insight into your behaviours and moods.

Start expressing yourself by writing a diary or a blog, if not a full-fledged media article, itself. Discover yourself through your own writings!