When Modi struck the wrong chord 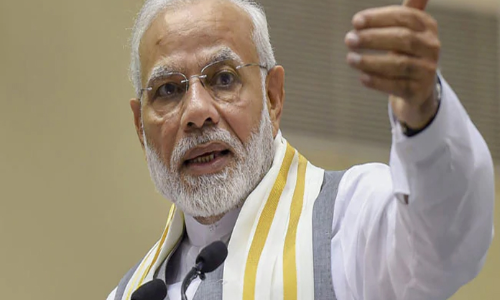 The term of the 16th Lok Sabha has come to an end All parties will now focus their energies on the ensuing elections In all probability, the notification for the Lok Sabha elections is likely to be announced during first week of March

The term of the 16th Lok Sabha has come to an end. All parties will now focus their energies on the ensuing elections. In all probability, the notification for the Lok Sabha elections is likely to be announced during first week of March. All top leaders will now put administration on backburner and will be burning midnight oil in working out strategies and counter strategies.

Normally, on the last day of the Lok Sabha, the leader of the House gives an account of what they have achieved, the performance of the government and thank the members of Opposition for raising various issues (even though they might not have been palatable to the government) and to the extent possible pun intended comments are avoided.

A couple of them in lighter vein are made and the Opposition too receives them with a laughter. This time Prime Minister Modi, while talking about some of the achievements of his government and thanking the Speaker and other members for the proceedings in the House, expressed confidence that his government will get a second term to complete the initiatives it had taken in the last four years but focussed more on hitting out at the Opposition’s role and the Congress president Rahul Gandhi's behaviour in the House.

He could have spent more time in patting his own back for removing 1400 laws and making things easy in administration. The positive side is that he spoke about the spirit of cooperation in regard to passing of GST and bipartisanship. He also took credit for passing stringent laws against corruption and black money.

Modi often refers to glass being half empty or full. It depends on how you look at it, he keeps on saying. Contrary to popular perception due to constant disruptions of proceedings, the productivity of the Lok Sabha during the BJP-rule was way above UPA II but slightly lower than the UPA I tenures. Disruption of House comes mostly from Opposition parties and if the productivity of the Lok Sabha this time was above UPA II, it only could mean that either the Opposition was more cooperative, or the ruling party bulldozed their way.

Whatever it may be one thing is certain that the 16th Lok Sabha saw the highest number of women members being elected to the House. 44 first-time women MPs were elected to the Lok Sabha. The second longest discussion of around 10 hours took place on the Right to Fair Compensation and Transparency in Land Acquisition, Rehabilitation and Resettlement (Amendment) Bill, 2015.

The AICC president who was made fun of by calling him as Pappu initially went into fast forward mode and has been combative against the Modi government and promises to continue to be so till the elections are over. Now that the real fight for power has begun, we need to wait and watch the people’s final decision on who would come to power not to rule but to serve them in the next five years.