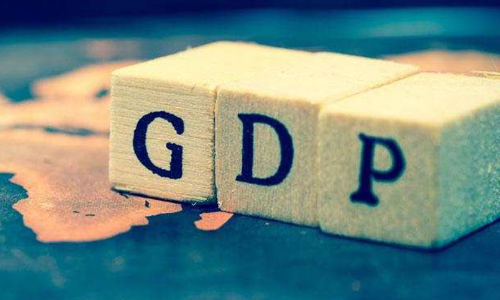 In the early weeks of the current fiscal year which kicked off on April 1, 2018, the BJPled NDA government at the Centre projected a GDP growth of 75 per cent for the FY19 which is set to end this month This projected economic growth number of 75 per cent was significantly higher than 64 per cent GDP upswing, a fouryear low, recorded in the preceding fiscal ie 201718 The growth was 71 p

In the early weeks of the current fiscal year which kicked off on April 1, 2018, the BJP-led NDA government at the Centre projected a GDP growth of 7.5 per cent for the FY19 which is set to end this month. This projected economic growth number of 7.5 per cent was significantly higher than 6.4 per cent GDP upswing, a four-year low, recorded in the preceding fiscal i.e. 2017-18. The growth was 7.1 per cent during the fiscal before i.e. 2016-17.

The Narendra Modi government's optimism for higher growth in FY19 stemmed from the fact that the Gross Domestic Product (GDP) registered nearly two-year high of 7.7 per cent upswing in the fourth quarter (Jan-March, 2018) of last fiscal and it expected the momentum to continue. The government was partly right as the first quarter (April-June, 2018) GDP clipped at a healthy 8.2 per cent which was later revised down to 8 per cent, still a higher reading.

Going by the signals from the ground however, it will not be easy for the economy to keep its growth pace at that level also. No surprise if it falls below seven per cent level this fiscal. For instance, data from CSO (Central Statistics Office) showed that agriculture growth slowed down to 2.3 per cent in Q3FY19 from 4.2 per cent in Q2 and 4.6 per cent Q1.

That's is a clear indication that farm sector's growth has been on a steady decline and it may continue in Q4 (Jan-March, 2019) period too. That means rural economy is under stress now. Manufacturing sector is also not in good stead while consumer spending fell to 8.4 per cent Q3 from 9.9 per cent in the previous quarter. These are clear-cut signals that economy has hit a slow lane as the country gears up for General Elections 2019.

But the only encouraging take away from the GDP numbers is that at the Q3 expansion of 6.6 per cent, India is still world's fastest growing economy. In the same October-December, 2018 period, China's GDP witnessed 6.4 per cent, 0.2 per cent lower than that of India's. But the bottom line is that India, at 6.6 per cent GDP growth in Q3, has added just Rs 2.15 lakh crore to its economy (Rs 32.85 lakh crore to Rs 35 lakh crore).

If we take that as an average, India would have added Rs 8.6 lakh crore in 2018 calendar year. China, even at lower growth, added a whopping $1.18 trillion (Rs 83.2 lakh crore) to its economy ($13.25 trillion) in 2018. That is 10 times of what Indian economy would have added to its economy ($2.9 trillion) in the same period. So, there is no point in chest-thumping about our world's largest growing economy tag. And we need to remember that any slow-down in GDP is a bad signal for a developing economy like ours.