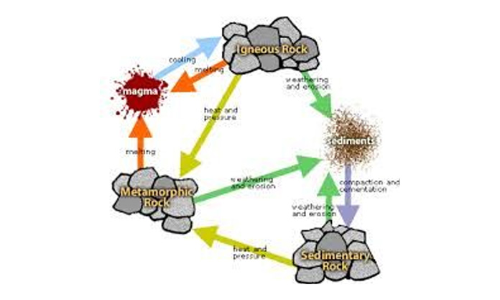 Solid as a rock Have you heard someone say that before Rocks have a reputation for being solid, hard, and indestructible Rocks line river beds and jut above the landscape as mountain peaks they are fun to collect and sometimes are very beautiful

‘Solid as a rock’ Have you heard someone say that before? Rocks have a reputation for being solid, hard, and indestructible. Rocks line river beds and jut above the landscape as mountain peaks; they are fun to collect and sometimes are very beautiful.

Each rock is different – some are smooth and round, some are sharp and dangerous. They come in all colors: pink, green, orange, white, red. They are everywhere, and we take their presence for granted and assume that they are unchangeable.

Unlike the water cycle, you can’t see the process happening on a day-to-day basis. Rocks change very slowlyunder normal conditions, but sometimes catastrophic events like a volcanic eruption or a flood can speed up the process. So what are the three types of rocks, and how do they change into each other? Keep reading to find out!

Three types of rock: Igneous rocks are formed when hot magma (melted rock) is rapidly cooled, either by hitting underground air pockets or by flowing from the mouth of a volcano as lava. Granite, obsidian, and pumice are all common examples of igneous rocks. Pumice is a very porous rock, because when the lava cooled, pockets of air were trapped inside. Because of all those air pockets, pumice can actually float!

Sedimentary rocks are formed by layers of sediment (dirt, rock particles, etc.) being mixed and compressed together for extended periods of time. Common examples of these rocks are limestone, sandstone, and shale. Sedimentary rocks often have lots of fossils in them because plants and animals get buried in the layers of sediment and turned into stone.

Metamorphic rocks are a combination of rock types, compressed together by high pressure and high heat. They usually have a more hard, grainy texture than the other two types. Schist, slate, and gneiss (pronounced like ‘nice’) are metamorphic rocks.

These rocks change over hundreds of years in the six steps of the rock cycle: Weathering & Erosion. Igneous, sedimentary, and metamorphic rocks on the surface of the earth are constantly being broken down by wind and water. Wind carrying sand wears particles off rock like sandpaper.