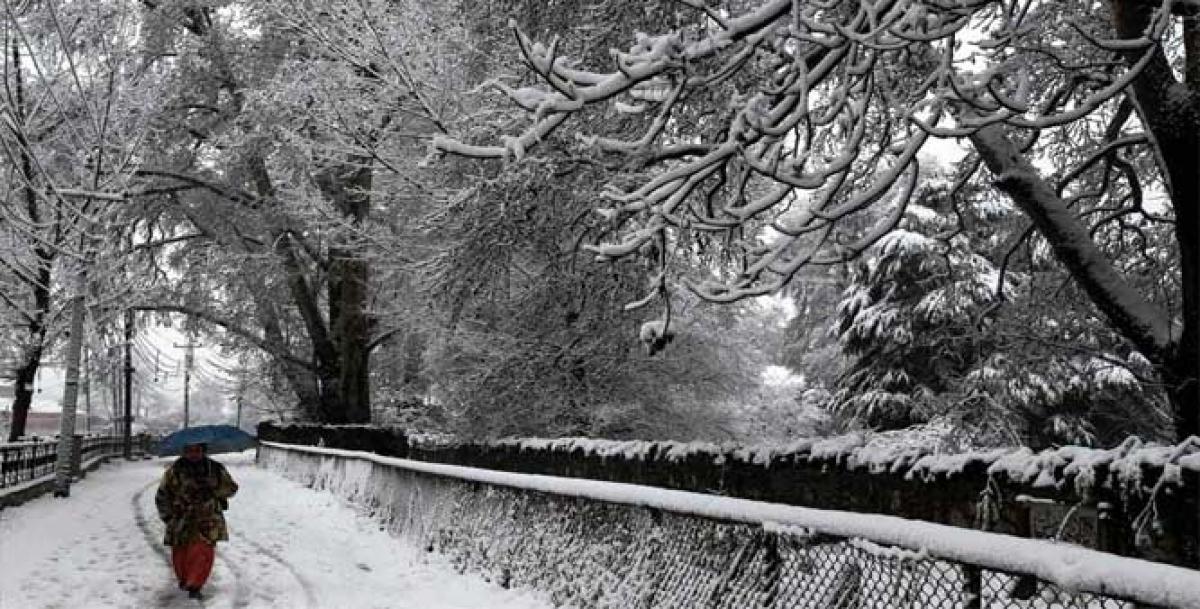 The traditional 40-day period of extreme cold, known as \'chillai kalan\', starts here Monday as locals brace up to face the bitter cold and expectantly look forward to heavy snowfall that would replenish rivers, streams, springs and lakes in Kashmir.

The traditional 40-day period of extreme cold, known as 'chillai kalan', starts here Monday as locals brace up to face the bitter cold and expectantly look forward to heavy snowfall that would replenish rivers, streams, springs and lakes in Kashmir.

"All perennial reservoirs of Kashmir in the mountains, those feed the local rivers, streams, lakes and springs during summer months are replenished by the snowfall during chillai kalan, Mansha Nisar, a teacher of environmental sciences here, told IANS.
"The snowfall during this 40-day period gets frozen and lasts longer. It is this snowfall that adds to the glaciers of the Valley. Any snowfall after the chillai kalan does not last long," she added.
Except for the office goers in summer capital Srinagar and other major cities and towns of the Valley, the one attire worn predominantly by the locals during the chillai kalan is the tweed over-garment called the 'pheran'.
Every Kashmiri, irrespective of his/her financial status, wears the pheran during the winter months. An earthen firepot, woven in a willow wicker basket is filled with hot charcoal and kept under the Pheran to keep the body and soul together during chillai kalan, is called a 'kangri'.
"The extreme shortage of electric supply and the growing costs of fossil fuels have made central heating and other methods of keeping homes warm during chillai useless. The best bet for a Kashmiri, even in the 21st century, is the pheran and the kangri. Long winter nights, frozen water taps, snow-blocked streets and highways cannot be faced without a pheran during the extreme winter," said Khwaja Nisar Hussain, a retired chief engineer here.
Icicles hanging from rooftops, frozen water bodies and snow games during long vacations make chillai kalan a merry time for children as parents worry about chilblains and winter cough.
"Children simply refuse to stay indoors, especially during a snowfall. They throw snowballs at each other, take joy rides on frozen water surfaces and make snowmen in lawns and market squares," said Abdul Gani Mir, who resides in Srinagar outskirts.
"They return home with red cheeks and running noses in the evening. Chilblains are common among children during winter. But, despite this all, snowfall and icicles make winter a great time for children and the youth," he added.
During this period, the night temperatures fall several degrees below freezing point and even the day temperatures hardly rise above seven degrees Celsius.
It mostly remains overcast during this period and even if the sun breaks loose of the cloud cover, it is feeble and helpless before the bone chilling power of chillai kalan.
People start lighting small fires around water tapes to de-freeze them in the mornings and before the first trickle starts, another freeze hits the water tap.
Most locals leave their water taps half running during the nights to prevent freezing of drinking water supply pipes.
To get more calories to fight the cold, locals make special dishes during this period. These include mutton and chicken-based dishes and also the 'harisa', sold in Srinagar and other major towns of the Valley only during the winter.
Harisa is made of mutton mixed with rice, spices and oil. Traditional harisa makers prepare the dish during the night and the first eaters arrive at their shops with the first light in the morning.
"A small portion of harisa is enough to keep you warm for the entire day because of its high calorific value", said Javaid Shah, who lives in the city's Lal Bazaar locality.
It is not just chillai kalan that heralds the extreme cold in Kashmir. This 40-day period is followed by 'chillai khurd' which last 20 days and then 'chillai bachcha' that last another 10 days.
"Sometimes chillai kalan is less harsh than the other two. For many years, we have experienced more snowfall and cold during chillai khurd and chillai bachcha than during chillai kalan", said Habibullah, a resident of Ganderbal district.
Show Full Article
Email ArticlePrint Article
More On
Subscribe
Subscribed Failed...
Subscribed Successfully...