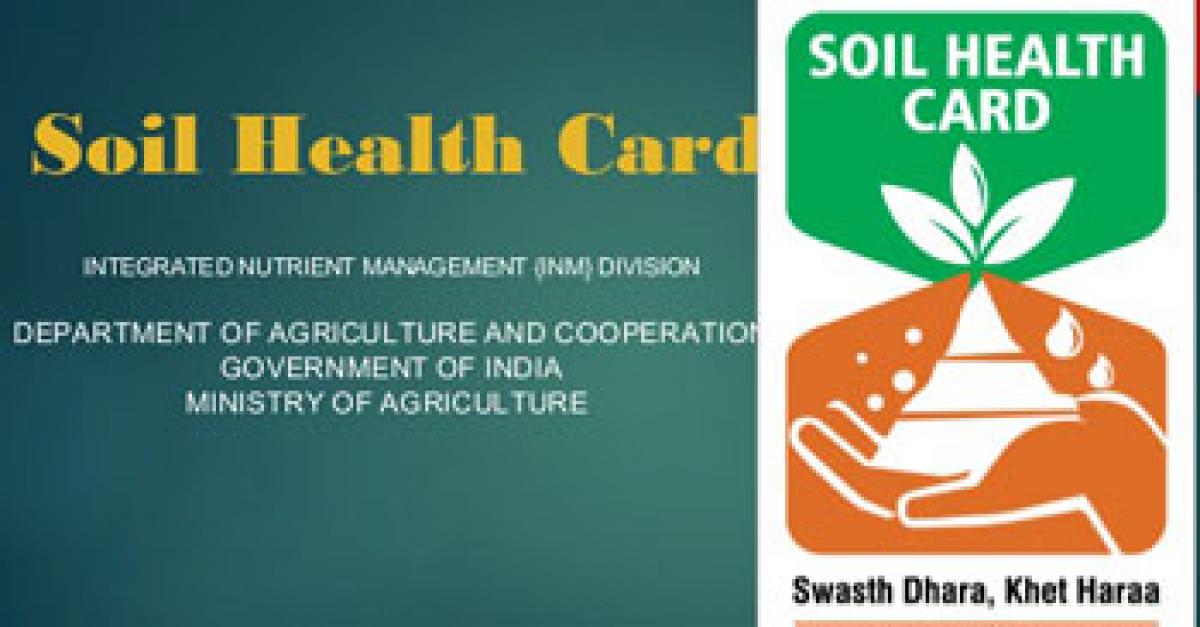 The target for the year 2015-16 is to collect 104 lakh soil samples and test them for issue of Soil Health Cards to farmers. More than 90 percent samples have been collected in states like Andhra Pradesh, Kerala, Meghalaya, Nagaland, Telangana, Sikkim, Gujarat, Bihar, Tripura, Tamil Nadu, Maharashtra, Punjab, Chhattisgarh, West Bengal and Himachal Pradesh.

360 Additional Soil Test Labs to be set up during 2016-17
Soil Health Card (SHC) Scheme is an important scheme of the Government. It aims at promoting soil test based and balanced use of fertilizers, so that the farmer can realize higher yields at lower cost. Simultaneously, soil health can be sustained. Earlier soil health cards were being given to farmers. However, these were largely the initiatives of State Governments, implemented over varying periods of time. These initiatives were sporadic & random and therefore did not cover all the farmers within a particular time cycle. The approach also was not comprehensive in term of procedure for collection of soil samples and standards for soil test. It was limit to, assisting the State Governments for Static Soil Testing Laboratories (SSTLs) and Mobile Soil Testing Laboratories (MSTLs). Earlier Government of India has never provided any assistance to the State Governments to undertake collection of soil samples and their analysis. As seen a major threat towards deteriorating soil health, there has never been comprehensive ‘Soil Health Card’ Scheme of the magnitude that Government launched in the year 2014-15 to provide SHC to all 14 crore farmers once in a cycle of 2 years, on a continuous basis. Comprehensive testing of soil samples for 12 parameters including micronutrients is being carried out under the scheme. The first cycle of the scheme will be completed in 2 years (2015-16 & 2016-17) with an outlay of Rs 568.54 crore.

The target for the year 2015-16 is to collect 104 lakh soil samples and test them for issue of Soil Health Cards to farmers. More than 90 percent samples have been collected in states like Andhra Pradesh, Kerala, Meghalaya, Nagaland, Telangana, Sikkim, Gujarat, Bihar, Tripura, Tamil Nadu, Maharashtra, Punjab, Chhattisgarh, West Bengal and Himachal Pradesh.

In 2016-17, 360 number of additional soil test laboratories will be made operational to test major and micro nutrients. This will increase the annual analyzing capacity of state laboratories from 1.78 crore to 2.14 crore.

All the District Collectors in all states have been asked to implement the latest guidelines for Establishment of Soil Testing Projects at Village level under Soil Health Management (SHM) Scheme of National Mission for Sustainable Agriculture (NMSA) to generate employment for rural youth and to improve timeliness in analysis of soil samples under Soil Health Card Scheme.

The guidelines of the scheme have been amended to set up soil testing labs as well as mini labs through Capital Investment Subsidy Scheme (CISS) implemented through NABARD. The guidelines have been modified to involve science students of Agriculture and other science colleges in soil health card programme.

The States of Himachal Pradesh & Sikkim have completed their two years target for sample collection.

• The States with good performance (above 75%) are Jharkhand, Uttar Pradesh, Uttarakhand, Goa and Rajasthan.