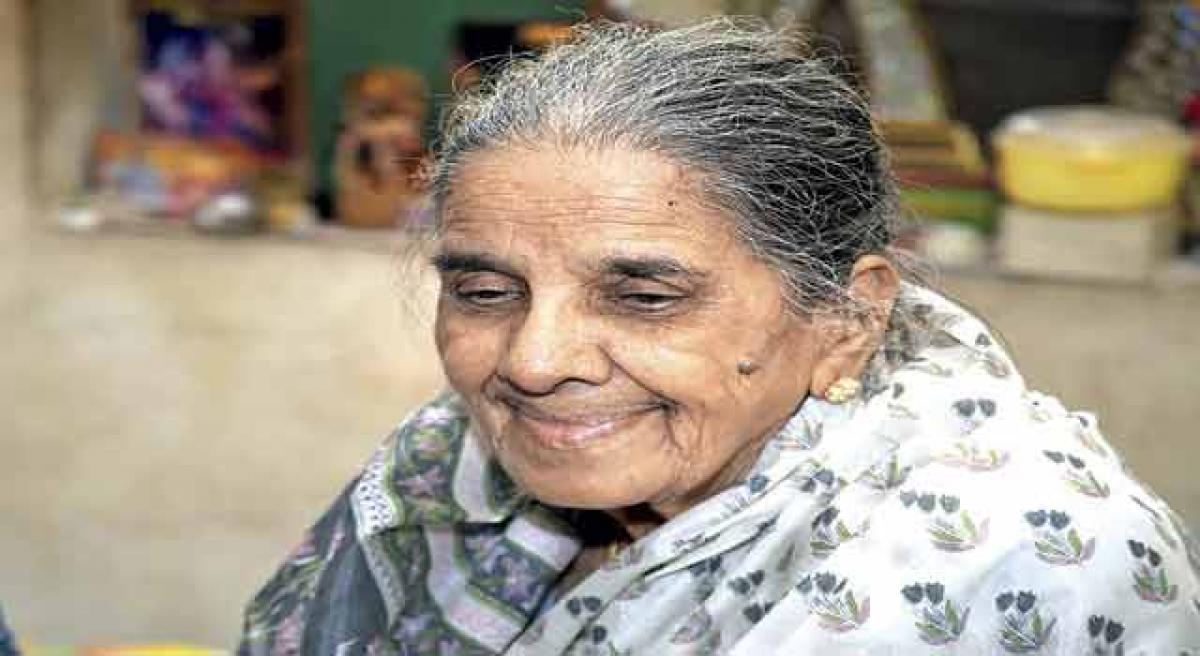 I don’t remember the exact date. I don’t even remember the year. I was about thirteen or fourteen then. Aai was on night duty. Kashi was in Pune on training. Only Babu and I were at home. It was around midnight. The entire chawl was asleep. So were Babu and I. And then a knock on the door, a thunderous knock. Babu woke up first and roused me. Then he opened the door. Outside: two policemen.

I don’t remember the exact date. I don’t even remember the year. I was about thirteen or fourteen then. Aai was on night duty. Kashi was in Pune on training. Only Babu and I were at home. It was around midnight. The entire chawl was asleep. So were Babu and I. And then a knock on the door, a thunderous knock. Babu woke up first and roused me. Then he opened the door. Outside: two policemen.

‘Laxmibai Lotlikar lives here right?’ one asked in a stern voice. No one had ever spoken her name in such dry bureaucratic accents before. Both Babu and I could hardly get a word out. ‘Acid has fallen on her body. You’ll have to come with us to the hospital,’ the other constable said in a slightly kinder voice. Babu and I burst into tears.

I, Salt Doll’, is the memoir of an exceptional woman, a theatre legend, Sushila Lotlikar, popularly known as Vandana Mishra, who lived through some “interesting time”. The book, translated by Jerry Pinto, is a vivid narrative laced with songs, sayings and soul

We went to the Chaudhurys and told them what had happened. Slowly, the residents of the chawl got to know and came to our door. Acid? On your Aai? How? What happened? Which parts are affected? The police had no details. ‘Come to the hospital,’ they said.

Babu and I went. Chaudhury Tai and Nanda’s Aai came with us. The police went ahead in a jeep. We took a taxi and followed them to Gokuldas Tejpal Hospital, near Victoria Terminus. I had always been in awe of taxis. This was the first time I had been in one. But what a terrible way to achieve a dream.

Aai was in the general ward. She was lying on her face. She was wearing a sari beneath the waist and above that we could not see because she was covered with a net. There was no way to tell anything else. ‘Babu, how did you get here?’ she managed to ask when she realised that we were there. And then she began to groan and asked for some water.

Next to her cot a water container had been placed. In her mouth a pipe had been fixed. She had to suck the water slowly. Her hair, which was long and thick, had been tied to the cot so that it would not fall on her back and stick there. She was lying on her stomach.

I looked at her and I was filled with horror. How had this happened to my firm and resolute Aai? Now, when I think back to the time, I strongly feel that Destiny treats us like toys. We are like puppets, at the receiving end of her whims and fancies. The police had taken down her statement. She had no idea what had happened or how.

She had been climbing the steps at Dr Saibai Ranade’s clinic when she suddenly became aware that something hot and burning had fallen on her back, as if needles of fire were running into her. She fell down the stairs, writhing in agony. Aai’s attitude to life had always been to keep herself to herself. She did her work well and did not like anyone doing her favours.

She had no enemies, nor did she get too friendly with anyone. Aai was asked if she felt someone had done this deliberately, with malice aforethought. Her answer was, ‘No’. The police at the Princess Street Police Station had registered the case as an accident.

I still have some unanswered questions about what happened that night. I find it difficult to believe that she was climbing the stairs of Dr Saibai’s Hospital and acid should have just happened to splash all over her. It seemed to me, then as now, that someone had done this deliberately. There was no reason for there to be bottles of acid lying around the stairs.

And even if we were to accept, for the purposes of argument, that a bottle just ‘happened’ to be on the stairs, how did it ‘happen’ to splash itself on my mother? It seemed that this might be part of a well thought-out plan. Who did it, then? Every workplace has its share of conflicts. Workers will often find themselves at loggerheads.

But none of this seemed to have happened at Dr Saibai’s hospital. It was a small place anyway. Aai handled almost everything there. There were one or two young men but the rest of the staff was female. There was no reason for the cleaners or cooks or sweepers to hate Aai.

There was one major possibility, though. Aai was young and beautiful. She was also a widow and a nurse. Had someone looked at her with lust in his eyes? And had he thrown acid at her when she had rejected him? Was this why she had been subjected to this monstrous attack? And had she done this to protect us? These thoughts would go round and round in my head until it was numb. And fire would fill me from head to foot.

(Excerpts from I, Salt Doll by Vandana Mishra; Published by Speaking Tiger; `299.)